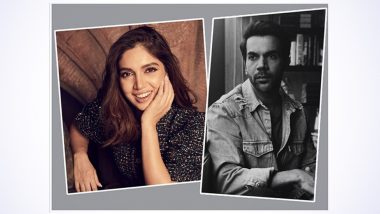 Filmmaker Anubhav Sinha's upcoming social drama titled Bheed starring Rajkummar Rao and Bhumi Pednekar is all set to hit the big screen on November 18. Sinha said that the film has a subject that he has built from a nagging thought in his head. "What started with a small idea, soon metamorphosed into a screenplay that nudged me to make the film on a large canvas. Bheed: Anubhav Sinha Wraps Production of His Upcoming Social Drama Starring Rajkummar Rao.

As a filmmaker, I believe entertainment has the responsibility of making its audience think. I have attempted that with every film of mine and that's what we are doing with Bheed. I have had the good fortune of working with an excellent cast." Bheed: Rajkummar Rao Concludes Filming for Anubhav Sinha’s Social Drama.

He added: "Bhumi, Raj, Dia are so good in the film. My crew was an important pillar of strength, pushing me to do better each day. I had the support of Bhushan Kumar, who is a dream collaborator. I can't wait for everyone to watch the film" Bhushan Kumar, joint producer of 'Bheed' adds: "We have finally locked the release date of what I believe is one of the most important films of 2022. Anubhav is a filmmaker who wants his distinct voice to reach the length and breadth of the country. Bheed is that film, that story which has the power to get everyone talking in one voice."

The film was shot through November and December last year. Bheed is jointly produced by Bhushan Kumar's T-Series and Anubhav Sinha's Benaras Mediaworks will release on November 18, 2022

(The above story first appeared on LatestLY on May 13, 2022 02:47 PM IST. For more news and updates on politics, world, sports, entertainment and lifestyle, log on to our website latestly.com).