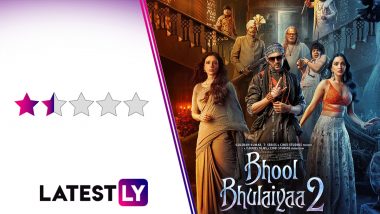 Bhool Bhulaiyaa 2 Movie Review: The first Bhool Bhulaiyaa film, when it came out in 2007, was a comic-psychological thriller with supernatural themes that fought against the blind beliefs and superstitions surrounding ghosts. Perhaps it says of our times that its sequel, Bhool Bhulaiyaa 2, not only replaced most of its cast and director, but also reneged to being a fare that promotes superstitions. But the makers prefer that I see Bhool Bhulaiyaa 2 as a separate story, even though it keeps pinching your nostalgic nerve about the original. So let me judge this 'sequel' directed by Anees Bazmee and written by Farhad Samji (first eye-roll), as it is. And be disappointed in a standalone manner, while I display more eye-rolls ahead! Ahead of Bhool Bhulaiyaa 2 Release, Kartik Aaryan, Kiara Advani Visit Delhi’s Gurudwara Bangla Sahib.

In a setup similar to DDLJ (second eyeroll), Ruhan Randhawa (Kartik Aaryan) meets Reet Thakur (Kiara Advani), while both are holidaying somewhere near Manali. Ruhan tells Reet to miss her bus for her village, so that they can party for one last night. Reet, who is hitched to marry someone else, agrees. In a twist of fate, the bus that they were supposed to travel, meets with an accident, with all its inhabitants killed.

Reet's family in Bhawanigarh, Rajasthan assumes that she is dead. Third eyeroll for the fact that no one bothered to even go to Manali to identify her body. Reet drags along Ruhan to her old palatial mansion to make sure her wedding is called off, and when her family confronts Ruhan, he claims that it is Reet's ghost that brought him there, and she wants everyone to shift to their old house. The problem is the mansion is already haunted by another ghost called Manjulika. So while Ruhan becomes Rooh Baba in the village due to his con-games and bit of luck, the spirit breaks out and seeks revenge for her confinement.

Bhool Bhulaiyaa 2 is not an exact sequel of the 2007 film, but is more of a spiritual successor that retains the name - both the movie's and the spirit's, Rajpal Yadav, two of the earlier film's best songs (the title song, which itself is plagiarised from a K-pop song, O Pritam!) and none of the charm that made the first film a decent watch. It is preposterously loud and boasts of a screenplay that takes any sort of logic for a huge toss, just like Manjulika does with tables around palace. And my eyes just kept rolling so much that, I was worried I would be stuck seeing my retinae for lifetime.

Look, it is extremely silly of me to expect some sort of sense in a screenplay that seeks humour in fat-shaming and sexist jokes (knock, knock! Who's there? It's 2022 and it wants you to grow up, Bollywood!), or in the fact that none of the character display any iota of intelligence. Going by the titters in the screen where I watched, there is a fanbase for these comedies but I am a stubborn fool who refuses to lower my sense of humour just because the makers want me to. Call it an obstinate habit created out of watching better comedies in the past. Why, even Anees Bazmee's earlier comedies feel masterpieces compared to what he serves here.

Taking a walk down the memory lane, Manichitrathazhu is one of the best films to come out of Malayalam cinema, and still continues to endear the viewers. None of the remakes managed to recreate the magic of the original, but Bhool Bhulaiyaa's director Priyadarshan (who worked as a unit director in the original) nevertheless made a decent remake, despite the fact that it gave more priority to comedy than the psychological horror aspect, and Akshay Kumar felt a miscast compared to Mohanlal (but was entertaining enough). Still, Bhool Bhulaiyaa at least knew where to fit the comedy and where it shouldn't.

Bhool Bhulaiyaa 2 just doesn't know where to draw that line.

The comedy is very farcical, and the troika of Rajpal Yadav, Sanjay Mishra and Ashwini Kalsekar irritate with their unfunny antics. It's even more annoying when the comedy spills to the horror scenes, thereby leaving this horror-comedy of genuine spooks, even in the supposedly serious finale that has Kartik go all "Ami Je Tomar" in Arijit Singh's voice. It's never helped by the fact the makeup on the ghost feels like a tribute to the Ramsay monsters, and not a good one at that! Bhool Bhulaiyaa 2: Kartik Aaryan's First Look Inspires Funny Memes as Netizens Make Hilarious Jokes Comparing it to Akshay Kumar's Original.

Within this ridiculous framework are trapped some very charming actors, just like their characters within the haunted mansion. At least, Kartik Aaryan seems to be having fun with his role. The actor is channeling the spirit of a younger Akshay Kumar, when the senior star is trying these days to pass himself off being the same age as Aaryan in some of his movies. Kartik has charm, swag and charisma, and he takes quite the effort to infuse those in the proceedings. If you love him as a star, then you can enjoy his antics. If not, then don't bother!

The pretty Kiara Advani is amiable in her role, though it is more of a mushy part. The only portion where her character stood out was when Reet channelled Manjulika (not a spoiler since it was in the trailer, like many of the film's other 'twists').

As for Tabu, I believe this two-time National Award winner likes to prank reviewers and admirers like me so that she enjoys reading when we write, "Tabu deserves better". Or perhaps she does enjoy doing spooky stuff, but after Hawa, Golmaal Again and now Bhool Bhulaiyaa 2, can someone really show her a better script in the genre? The rest of the cast - Rajpal Yadav, Milind Gunaji, Sanjai Mishra, Amar Upadhyay, Ashwini Kalsekar and Rajesh Sharma -  either are vacuous or ham to the hilt.

PS: SPOILER ALERT ahead (but this more for the Malayalam viewers), but while Bhool Bhulaiyaa 2 might fashion itself as a standalone sequel, it is in fact quite similar to Geetanjali, the sequel to Manichitrathazhu. Those who are unfortunate to watch the Malayalam sequel know that it is a terrible inspiration to go after. In fact, the main plot twist - borrowed from a 2007 Thai film - also lent itself to a Bollywood film. Simple enough, if your movie has a mystery surrounding identical twins with one supposedly dead, guess what the reveal would be?

- The Many Versions of "Ami Je Tomar" (There is a Shreya Ghoshal version, an Arijit Singh version, a Twins version, a Father version... they just squeezed a lot out of their best , borrowed, song). The magic still sustains that I kept humming the song even when I was still annoyed with where it was placed.

- The Comedy is Way OTT, and the Spooks are Utterly Un-spooky

If you are heads over heels in love with Kartik Aaryan and can laugh at a scene where a ghost smashes Rajpal Yadav as the Hulk did Loki in The Avengers, then congrats, you might be enchanted by Bhool Bhulaiyaa 2. For the rest, this film is a seemingly endless maze of absurdity and garishness that's exorcised off any good humour and spooky thrills.

(The above story first appeared on LatestLY on May 20, 2022 12:24 AM IST. For more news and updates on politics, world, sports, entertainment and lifestyle, log on to our website latestly.com).