Bobby Deol On Failure & Success: I Had Absolutely Nothing and My Children Started Asking Why Don't I Go To Work!

Bobby Deol reveals "Till this day I don't want to be a businessman. That's how we the Deols are, the whole family, none of us is a good businessman. We are actors! 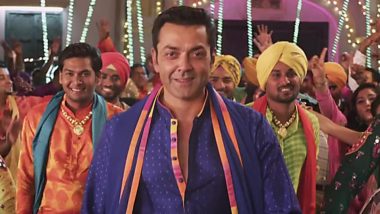 We caught up with actor Bobby Deol recently and the 51-year-old had no qualms about talking about facing failures and learning from them only to emerge wiser, and eventually be on the path-that of acting and working in the movies. When quizzed how did he survive the lull phase in his career, Bobby stated matter-of-factly that he had absolutely nothing, no other choice or an alternative career to fall back on. "I had no other alternative. I had nothing. All I wanted to do in my life was acting. I never wanted to do any other business or become a businessman." says Bobby.

He further adds. "Till this day, I don't want to be a businessman. That's how we the Deols are, the whole family, none of us is a good businessman. We are actors. I have two legends at home my dad (Dharmendra) and my brother (Sunny Deol). So I just need to work everyday. Struggle is a part of our lives and all actors go through struggles." Bobby Deol's Digital Outing with Aashram is the New Topic For Meme Makers; Netizens Welcome His Announcement with Amusing Reactions

"Something snapped in me when my kids started questioning why don't I go to work. I think I had gone off the track and I would also think that I was not lucky enough.I was in the right direction initially but I lost my track and I would always be dependent on something that would pacify me, help me calm down. I think pain, failure and misery can teach you much more than success and fame. In the end, I think one should not give up at all, no matter what!" stresses Deol. Bobby Deol On Nepotism: I'm a Bollywood Insider, But My Father Was an Outsider Once Upon a Time!

After seen in 'Race 3', Bobby has been gearing up to hone his craft. This year he  featured as the lead actor in endevours such as 'Class of 83' and now Prakash Jha's 'Aashram' in which Bobby is seen playing the self-styled Godman who is an evil mastermind in reality, and he exploits people's faith as well as their spirituality for his personal gains.

(The above story first appeared on LatestLY on Sep 02, 2020 04:27 PM IST. For more news and updates on politics, world, sports, entertainment and lifestyle, log on to our website latestly.com).