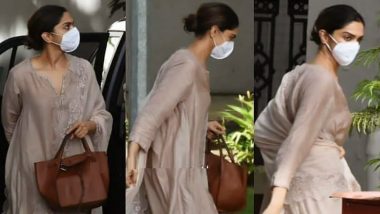 Deepika Padukone’s name emerged in connection to the ongoing Bollywood drug probe that has come in limelight during Sushant Singh Rajput’s death case investigation. The Bollywood actress who was shooting in Goa for her upcoming flick was issued summons by the Narcotics Control Bureau (NCB) on September 23. The actress was spotted arriving at the NCB office in Mumbai today for the interrogation. Pics and videos of her arrival are all over the internet. Deepika Padukone, Ranveer Singh Fly Back to Mumbai From Goa for Actress' NCB Appearance.

Deepika Padukone reportedly arrived around 9.45am at the Mumbai Port Trust Guest House in Colaba for interrogation from where the NCB is operating. The news agency ANI has shared a video of Deepika Padukone’s arrival at the NCB Office. “Actor Deepika Padukone arrives at Narcotics Control Bureau (NCB) SIT office. She has been summoned by Narcotics Control Bureau to join the investigation of a drug case, related to #SushantSinghRajputDeathCase,” reports the agency. Besides Deepika, the others who would be questioned related to this case include the actress’ manager Karishma Prakash and actresses Shraddha Kapoor and Sara Ali Khan. Bollywood Drug Probe: Rakul Preet Singh, Deepika Padukone’s Manager Karishma Prakash Reach NCB Office.

She has been summoned by Narcotics Control Bureau to join the investigation of a drug case, related to #SushantSinghRajputDeathCase. pic.twitter.com/kzxaHGvXFl

Reports suggest that the Mumbai Police has arranged for maximum security outside the NCB office. Actresses Shraddha Kapoor and Sara Ali Khan are also expected to appear before NCB today. Rakul Preet Singh, who was also issued summons by the NCB, was interrogated on Friday and her statement has been recorded by the SIT.

(The above story first appeared on LatestLY on Sep 26, 2020 10:56 AM IST. For more news and updates on politics, world, sports, entertainment and lifestyle, log on to our website latestly.com).