Chhal Gaya Chhalaa From the Girl on the Train Out! Parineeti Chopra Drowns in Alcohol to Forget the Pain (Watch Video)

Parineeti Chopra's expressions are intense in the song and her eyes very gracefully express the pain she is going through. Crooned by Sukhwinder Singh, the song has been composed by Sunny Inder. The hard-hitting lyrics have been penned by Kumaar. 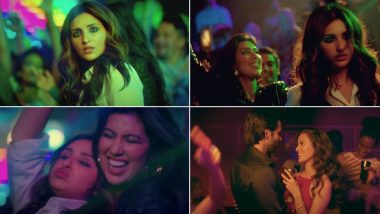 Chhal Gaya Chhalaa From The Girl On The Train (Photo Credit: Youtube Stills)

The Girl On The Train starring Parineeti Chopra in the lead role is one of the most talked-about films currently. The trailer of the film which was released recently made a huge impact on the audience and everyone was impressed with Parineeti's acting in the short glimpse. The makers have ever since been sharing posters and updates about the film. Today, to pique the excitement levels amongst the fans, the team has released a soulful track titled "Chhal Gaya Chhalaa." The Girl on the Train Trailer: Is Parineeti Chopra a Murderer or Not? Watch the Actress Take You On ‘One Hell of a Ride’.

The song feature Parineeti in a rather gloomy avatar. She is seen getting drunk beyond limits in a bar and losing her conscience. The actress is distressed about how she has lost the love of his life to another woman and is feeling alone even around so many people. Parineeti Chopra's expressions are intense in the song and her eyes very gracefully express the pain she is going through. Crooned by Sukhwinder Singh, the song has been composed by Sunny Inder. The hard-hitting lyrics have been penned by Kumaar.

Talking about the song, Parineeti said, "As an actor, I think I did this film to do this song. Keeping tears in my eyes for two days. I needed a day off after this shoot. I was exhausted but happy. Thank you Ribhu for letting me capture this on camera once in my life." The actress will be seen playing the role of a girl who suffers from short term memory loss.

Speaking about the film, Parineeti Chopra had earlier revealed that she was not apprehensive to do the official remake of Emily Blunt's The Girl On The Train. "I have approached my role without the baggage of what I saw Emily do. I made the character my own and I was clear that I wanted to add my own touch to the role. I appreciate that people have loved what I have tried to do on the screen and I can guarantee them that they will thoroughly enjoy this edge of the seat thriller when the film releases," added the actress.  Parineeti Chopra, Avinash Tiwary's The Girl On The Train to Premiere on Netflix on February 26.

The Girl on the Train is helmed by Ribhu Dasgupta where Parineeti Chopra plays the eponymous girl taking the train, an alcoholic divorcee, who becomes involved in a missing person investigation and uncovers deeper secrets. The film also stars Avinash Tiwary, Kirti Kulhari, Aditi Rao Hydari in pivotal roles. The Girl On The Train will have a direct-to-digital premiere on February 26, 2021, on Netflix.

(The above story first appeared on LatestLY on Feb 08, 2021 08:58 PM IST. For more news and updates on politics, world, sports, entertainment and lifestyle, log on to our website latestly.com).