Cirkus: Before Ranveer Singh, Did You Know Shah Rukh Khan and Tusshar Kapoor Were Once to Star in this Rohit Shetty Film?

Shetty has worked with SRK in Chennai Express which was a blockbuster. On the other hand, Tusshar Kapoor has been an eminent part of his Golmaal franchise. 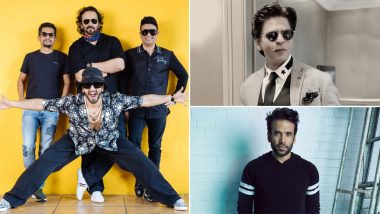 Ranveer Singh has once again collaborated with director Rohit Shetty for a comedy film. A new films based on Comedy of Errors has been announced with him in the lead and has been titled as Cirkus. The film also stars Varun Sharma, Pooja Hegde and Jacqueline Fernandez in the lead. It will also be the first double role of Ranveer Singh. However, did you know that Rohit was contemplating on casting Shah Rukh Khan and Tusshar Kapoor in this flick earlier? Cirkus: Ranveer Singh, Jacqueline Fernandez, Pooja Hegde In Rohit Shetty's Family Entertainer Next.

Shetty has worked with SRK in Chennai Express which was a blockbuster. On the other hand, Tusshar Kapoor has been an eminent part of his Golmaal franchise. His idea of casting these two actors does not turn out to be surprising hence. However, Shetty was more concerned about casting the superstar King Khan in this light hearted film, thanks to his starry aura.

TOI earlier quoted him saying, "If you give SRK (a film like) Angoor, he will make it into a watermelon! It’s a very sweet story. But when we try to make a simple film bigger, its essence and sweetness diminishes and it goes into another zone. I can go to a hill station, and make a film like Angoor in two months and come back. But I’m still wondering if I want to make a film on that scale or not.” His reasoning is not misplaced, because generally, when a filmmaker like Rohit teams up with an actor like SRK, the audience expects the film to be made on a mega canvas." Speaking of the film now, it is going on the floors next month and will be shot in Mumbai, Ooty and Goa.

(The above story first appeared on LatestLY on Oct 19, 2020 11:31 AM IST. For more news and updates on politics, world, sports, entertainment and lifestyle, log on to our website latestly.com).