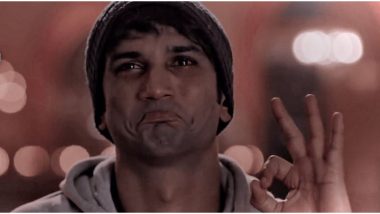 After making its digital premiere on Disney+Hotstar, Sushant Singh Rajput’s last film Dil Bechara made it’s way to the small screen on August 9, 2020, at 8 pm IST. This marked the first-ever TV premiere of the film and as expected fans of the late actor got all heartbroken after seeing SSR for the last time. Dil Bechara revolves around the story of Manny and Kizie who fall in love with each other. However, the bitter part of their life is that both are diagnosed with cancer. All in all, two people battling a deadly disease yet being hopeful is weaved beautifully in the movie. Also, this one is an official adaption of John Green’s best-selling novel, The Fault In Our Stars. Sushant Singh Rajput's Dil Bechara's IMDb Rating Soars To 9.8, Becomes Highest Rated Indian Film Ever.

From posting scenes from Dil Bechara, remembering the late actor's last brilliant performance to falling in love with the word ‘seri’, netizens could not keep calm and made the film’s TV premiere quite a memorable day. Here are a few Twitter reactions below. Dil Bechara Movie Review: Sushant Singh Rajput's Final Film Is Entertaining Yet Soothing Balm for Aching Hearts.

This is last movie of SSR. But can't beleive, SSR is no more in this universe when i started Watching this movie 😭 pic.twitter.com/6JciKLXOzb

Watched #DilBechara again on TV today... #sushantsinghrajput has made us laugh cry nd emotional through out the movie...this scene♥

Hope he will get justice soon 💜 pic.twitter.com/b48rIyEkJy

Did he really feel like this was his last movie #DilBechara Because in movie he He asked his friend (will you miss me?) as if he was asking us we, Heartbreaking Line

We will miss your

We never forget you

I watched the #DilBechara♥️♥️ Movie again today. we will miss you Sushant sir,😭😭😭😭

Thank you #StarPlus for showing this movie on TV pic.twitter.com/ddeX6ZrFlQ

It's really hard to watch his last movie #DilBechara . @itsSSR u always be missed 😭😔 pic.twitter.com/XIAUSoBDSM

At the time of its OTT release, Dil Bechara had created history by scoring a 9.8 rating on IMDb. The film is casting director Mukesh Chhabra's debut movie as a filmmaker. The movie stars Sanjana Sanghi opposite SSR and also sees charismatic Saif Ali Khan in a cameo role. Sushant Singh Rajput died by suicide on June 14, 2020. Stay tuned!

(The above story first appeared on LatestLY on Aug 09, 2020 11:30 PM IST. For more news and updates on politics, world, sports, entertainment and lifestyle, log on to our website latestly.com).