Bollywood actor and singer Diljit Dosanjh is also a huge softy at heart, and his philanthropy actions prove the same. 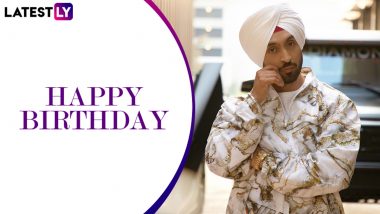 While Punjabis in general are large-hearted is a known fact, Bollywood actor and singer Diljit Dosanjh is also a huge softy. And his philanthropy actions prove the same. The actor, who made an impressionable debut in the Hindi film industry in 2012, is a sought after performer in the industry in today's times. However, the actor has always made it to the news, not just for his acting and singing talent, but also for his charity work, that he tries to keep under the wraps. Diljit Dosanjh Birthday: Here’s Looking At Impressive Roles Played By The Singer-Actor!.

Dosanjh, in 2013, started an NGO named Saanjh Foundation that aims at providing for old people and underprivileged children. The NGO's main motto is to contribute to old age homes and orphanages. In fact, apart from providing the poor with monetary back-up, the organisation also focuses on the mental health and well-being of children and helps them deal with self-esteem issues, inculcating self-confidence, anti-bullying, mentoring, and career development. Diljit Dosanjh Joins the Farmers’ Protest at Singhu Border, Lends a Massive Support to the Cause (Watch Video).

We all also know of Diljit's recent Twitter exchange with Kangana Ranaut over the on-going farmers' protests. What many do not know, is that apart from the exposure that the movement is seeing because of Diljit's support, the man also contributed Rs 1 crore towards providing the farmers protesting in the harsh Delhi weather with warm clothes.

While this was done in a discreet manner by Diljit, Punjabi singer Singga took to his Instagram to reveal what Diljit did for the farmers. Expressing his gratitude, Singga said in Punjabi in the video, “Thank you brother, you gave Rs 1 crore for the farmers, for their warm clothes, and nobody knows. You didn’t post about it. Nowadays people can’t shut up after donating Rs 10.” Well Diljit, dil jeet liya yaar tune toh Happy wala birthday!

(The above story first appeared on LatestLY on Jan 06, 2021 12:25 PM IST. For more news and updates on politics, world, sports, entertainment and lifestyle, log on to our website latestly.com).