Exclusive! Sai Tamhankar Wants to Work With THIS Bollywood Actor Next and It’s Not Ranbir Kapoor or Ranveer Singh - Watch Video

Can you guess the actor we are talking about? 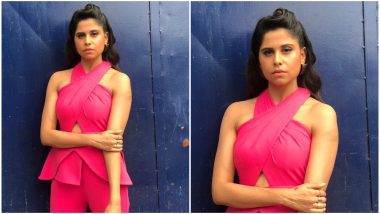 Sai Tamhankar is a brilliant actress who has impressed us with her powerful performances in Marathi cinema. She marked her Bollywood debut in 2015 with Gulshan Devaiah starrer, Hunterrr. Post which she disappeared from the Bollywood scenario only to return with Love Sonia after three long years. We have seen the movie and it's extremely hard-hitting, emotional and poignant. With some powerful performances from actors like Manoj Bajpayee, Richa Chaddha, Mrunal Thakur and Sai herself, the film is not a massy entertainer but definitely worth all your time. LatestLY recently got in touch with the actress to have a chat on her upcoming release. From the reason why she signed this role to the actor she wants to work with next, Sai was a delight as an interviewee. Love Sonia Movie Review: Mrunal Thakur is a Revelation Aided By Terrific Manoj Bajpayee, Richa Chadha in This Horrifying Tale of Survival Against Odds.

When we asked Sai if there's an actor who she wants to work with next, we expected the usual answer. We believed she would pick Shah Rukh Khan, Salman Khan or Ranbir Kapoor as her co-star but hey, she did us surprise us and how! The Hunterrr actress, in fact, said she was keen to collaborate with Gulshan (Devaiah) again. Guess a debut movie is always close to any actor and Sai just wants to cherish her good ol' days. Besides, Gulshan is a terrific actor and a great co-star. So we hope the filmmakers are listening and they plan to cast this reel life couple soon. Exclusive! Sai Tamhankar Reveals Why She Disappeared From Bollywood After Her Debut With Hunterrr in 2015 - Watch Video.

Sai is quite excited about her second Bollywood outing and she hopes it helps her bag more movies in B-town. The dearth of scripts was actually the reason that never prompted her to sign more movies. However, she is glad Love Sonia came her way and she was able to bag it.

(The above story first appeared on LatestLY on Sep 13, 2018 01:12 PM IST. For more news and updates on politics, world, sports, entertainment and lifestyle, log on to our website latestly.com).