Guru Dutt is considered as one of the greatest directors of all time. He was not just a director, but also an actor and producer as well. Famous for making lyrical and artistic films, he was India’s most-accomplished filmmakers. 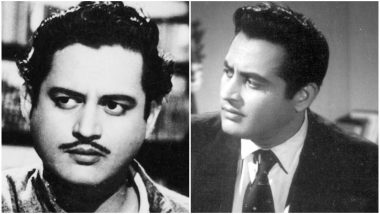 The veteran filmmaker Vasanth Kumar Shivashankar Padukone is widely known as Guru Dutt. Born on July 9, 1925, this legendary director has given Indian cinema few cult classics. He was not just a director, but also an actor and producer as well. There are many actors who have been inspired by his work. In fact, in an interview to a leading daily Kabir Singh star Shahid Kapoor had stated, “My love for Hindi film arose when I saw Guru Dutt in Pyasa and Sahib Bibi Aur Ghulam. These are the films that left me with me, reports DNA.” On the birth anniversary of Kaagaz Ke Phool director, let’s take a look at some of the lesser facts. RD Burman 80th Birth Anniversary: 5 Timeless Songs of Pancham Da Dedicated to Monsoon That Will Warm Your Heart.

Guru Dutt was born in Bangalore (also called Bengaluru) and breathed his last in Bombay (now Mumbai). He passed away at an early age,  39, on October 10, 1964. His original name was Vasanth Kumar Shivsankar Padukone which was changed to Guru Dutt. Dutt’s parents were originally settled in Karwar but later relocated to Bombay, and he joined them in 1944. Guru Dutt spent his childhood in Bhowanipore, a neighbourhood in Calcutta (now Kolkata). And hence he was fluent in speaking the Bengali language. Dutt has a sister named Lalita Lajmi; she’s a famous Indian painter.

Before stepping into the world of cinemas, Guru Dutt worked as a telephone operator at the Lever Brothers factory in Calcutta. He quit the job and joined his parents in Bombay. His uncle helped him settle with another job, a three-year contract with the Prabhat Film Company in Poona (now Pune). There he first worked as an actor and then as a choreographer. As an actor, he did small roles in films like Chand (1944), Lakhrani (1945) in which he acted and assisted director Vishram Bedekar, the next year he served as an assistant director and choreographed for the film Hum Ek Hain.

The three-year contract signed by Guru Dutt with the Prabhat Film Company came to an end. But by then he had made good friends. It was at this film company where he met actors Rehman and Dev Anand, and the trio remained friends for life. After his contract ended, Dutt’s mother helped him to get a job as a freelance assistant with Baburao Pai, the CEO of the Prabhat Film Company and Studio. Post it he was unemployed for a brief period, but by then he developed English writing skills and penned down short stories for The Illustrated Weekly of India.

Guru Dutt made his directorial debut with the film Baazi, inspired by the 1946 Hollywood movie, Gilda. This was the second film of Dev Anand’s production house Navketan Films. The crime thriller featuring Dev Anand, Geeta Bali and Kalpana Kartik was commercially successful at the box office. He has given Indian cinema notable and first of their kind films such as Pyaasa, Kaagaz Ke Phool, Chaudhvin Ka Chand and Sahib Bibi Aur Ghulam. Kaagaz Ke Phool, which is now a cult classic, was back then considered as a box office disaster.

Guru Dutt always believed in his team and his film distributors. He would not worry about the commercial success of his film, but rather start working on the next one. Known as the Orson Welles of India, Guru Dutt was known to have a blend of artistic and commercial success. It is also said he was the first one to give Indian cinema the ‘close-up shot’ and hence it is known as the ‘Guru Dutt Shot’.

Guru Dutt got hitched in 1953 to renowned playback singer, Geeta Roy Chaudhary, who was later known as Geeta Dutt. The duo had two sons and a daughter. It is said that Dutt had an unhappy marital life due to his undisciplined behaviour in his personal life. His heavily drinking and smoking habits created lot of issues in his married life. He was also linked to actress Waheeda Rehman and that also affected his married life.

It is stated that Guru Dutt’s death may have been suicide or an accidental overdose. However, his son Arun Dutt considers that his father passed away due to overdose of pills and excessive liquor consumption. Dutt lived alone in an apartment in Peddar Road, Bombay, and was found dead on his bed. He was already separated from his wife Geeta Dutt. The filmmaker had many films that were unfinished at the time of his death and Baharein Phir Bhi Aayenghi was the last one on which Guru Dutt was working.

Guru Dutt is considered as one of the greatest filmmakers of all time. In October 2004, the India Post released a postage stamp featuring Guru Dutt. Famous for making lyrical and artistic films, he was India’s most-accomplished filmmakers and his works are cherished even today.

(The above story first appeared on LatestLY on Jul 09, 2021 08:40 AM IST. For more news and updates on politics, world, sports, entertainment and lifestyle, log on to our website latestly.com).