Happy, Bagga and Afridi sahab are confused about the new Happy on the run. Check out the hilarious teasers of Happy Phirr Bhag Jayegi here. 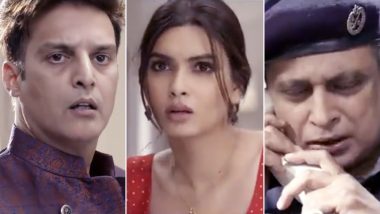 Diana Penty starrer ‘Happy Phirr Bhag Jayegi’ is making the right noise. The makers are generating the curiosity around the new Happy who is on the run this time. The teasers dropped by the filmmakers introduced us again to old cast including Piyush Mishra (Afridi sahab) and Jimmy Shergill (Bagga) and of course he very chirpy Diana Penty aka Happy. The new girl on the run has confused everyone because of her name. The trailer which will be out tomorrow will finally tell us who is the new Happy!

This time the sequel of this Muddasar Aziz directed film will have a new member namely Sonakshi Sinha. We wonder if she will be the new Happy in the film along with the old one. Also, we are yet to know where the lead men, Ali Fazal and Abhay Deol are! Check out the teasers!

Happy is  confused about the new Happy!

Afridi sahab is in no mood solve Happy's case

In a recent interview, Diana said, “If you like the first one, you will also like the second one. It’s the same space. It is funny, crazy and sweet. It’s a joyride. It is funnier than the first one. It feels good that a film is good enough for the makers to consider a part two. I feel proud when I think of that. It’s a unique story and director Mudassar Aziz really aced it. I feel it is even funnier than the first one." Well, we hope for a more interesting sequel this time from the makers. The film is slated to release on August 24 this year.

(The above story first appeared on LatestLY on Jul 24, 2018 04:14 PM IST. For more news and updates on politics, world, sports, entertainment and lifestyle, log on to our website latestly.com).