Korean drama Crash Landing On You starring Hyun Bin and Son Ye-Jin, uses a line from The Lunchbox and we have it here right here for you. The show is now streaming on Netflix. 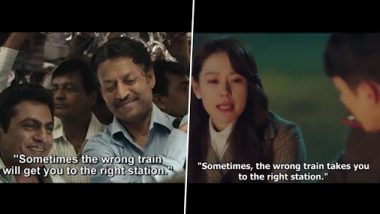 The Lunchbox And Crash Landing On You (Photo Credit: Youtube)

Korean Dramas have taken the world by storm. Yes, it isn't a recent phenomenon. We have been obsessed with them for many years now. With Parasite's many wins at the Oscars this year, South Korean shows, movies, and K-Pop have become even more sought after. So while binge-watching Hyun Bin and Son Ye-Jin starrer romantic show Crash Landing On You, we couldn't help but notice this callback to India and especially The Lunchbox. In one of the scenes, where both of them are stranded on a field in North Korea because there's a blackout and the train can't move, they sit next to a bonfire and discuss life. After Ode to My Father’s Hindi Adaptation Bharat, These Korean Films Could Be the Perfect Choice For Bollywood Remakes

At one such point, Son Ye Jin who played a successful entrepreneur Yoon Se-ri, tells North Korean officer Ri Jyeong Huk, "Sometimes a wrong train takes you to the right station." The same dialogue was used in The Lunchbox where Nawazuddin Siddiqui says it to Irrfan Khan on a local train. Check them out here...

Here's the quote from The Lunchbox

It might come across as too far-fetched but we couldn't dismiss the similarity here. Son Ye Jin does say it is an Indian proverb and what could be a better source than The Lunchbox which got international acclaim. Crash Landing On You broke many records in South Korea when it aired on TV. You can check it out on Netflix.

(The above story first appeared on LatestLY on Mar 24, 2020 03:05 PM IST. For more news and updates on politics, world, sports, entertainment and lifestyle, log on to our website latestly.com).