Janhvi Kapoor Gets Emotional at Dhadak’s Special Screening, Takes Along Mom Sridevi’s Photo With Her 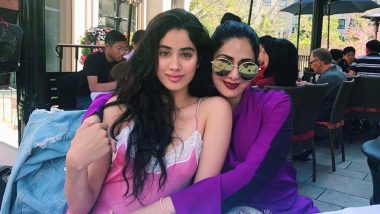 It has been a few months since the sad demise of Bollywood superstar Sridevi. Her sudden death left an unbearable void in the industry and the fans still cannot come to the terms with the shocking incident. Now, her daughter Janhvi Kapoor is all set to enter Bollywood with her first film ‘Dhadak’ along with Ishaan Khatter, directed by Shashank Khaitan. On this special occasion, the budding star could not help but miss her mom terribly. As reported in spotboye.com, Janhvi carried a photograph of her mother to the special screening of the film.

Every Sridevi fan knows how close she was with her daughters and especially their careers. The actress who apparently did not want Janhvi to get into this uncertain field, ultimately supported her and gave all the love and lessons she would need to be a part of this industry. Definitely, the special screening must have been a super-emotional moment for the Kapoors.

As per the reports in Bollywoodlife.com, she has even included a small heartfelt note for Sridevi in the beginning of the film. A source told the entertainment portal, “Janhvi has written a heartfelt note to Sridevi which has been attached in the very beginning of the film, along with their picture. She wanted to dedicate her first film to her mother and it was only obvious for the makers to include this special tribute in the film.”

Well, we wish all the success to the young diva on the block. Dhadak is an official adaptation of critically acclaimed Marathi blockbuster, ‘Sairat’ helmed by Nagraj Manjule. The film is slated to release on July 20.  Stay tuned with us for more updates.

(The above story first appeared on LatestLY on Jul 19, 2018 02:14 PM IST. For more news and updates on politics, world, sports, entertainment and lifestyle, log on to our website latestly.com).