Kalki Koechlin Croons a Sweet Melody for Baby Sappho and it’s the Cutest Video You’ll See on the Internet Today! 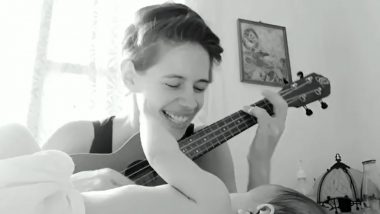 Kalki Koechlin, the adorable mommy of baby Sappho, has been dropping some lovely videos of the mother and daughter duo on Instagram. Fans are definitely enjoying to see the two together and having some cute moments. The popular videos are the ones in which Kalki is seen singing lullaby for her daughter. And every time she sings a lullaby, she would opt for a different language. African, Portuguese, Bengali, she sang in all these languages, and so beautifully. Sappho was definitely enjoying listening to her mommy dearest. Now, once again Kalki has crooned to a sweet melody for her baby girl and we bet, it’s the cutest video you’ll see on the internet today. Mommy Kalki Koechlin Sings the Bengali Lullaby ‘Ghum Parani Mashi Pishi’ to Baby Sappho and We Are All Hearts for It (Watch Video).

The song that Kalki Koechlin has sang is “La Vie en rose”, the signature song of French singer Édith Piaf. The lyrics of this beautiful song was written by the popular singer-songwriter and was released in 1947. This single became a hit back then was later covered by many other artists over the years. Kalki with her little munchkin gave their interpretation of this sweet love song. While sharing the video Kalki wrote, “La vie en rose Sharing our interpretation of Edith Piaf's sweet love song with a little improvising from Sappho.” Guy Hershberg Captures Candid Moment of Kalki Koechlin and Their Daughter Sappho (View Pic).

As soon as Kalki Koechlin shared this video on Instagram, there were many who couldn’t stop praising her and the little cutie pie. Dia Mirza, Sayani Gupta, Tillotama Shome, Sapna Bhavnani, Sobhita Dhulipala, Tara Sharma Saluja and many others were all hearts for this video.

(The above story first appeared on LatestLY on May 26, 2020 09:39 AM IST. For more news and updates on politics, world, sports, entertainment and lifestyle, log on to our website latestly.com).