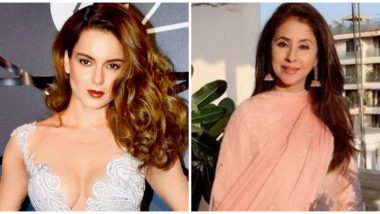 Kangana Ranaut has made another enemy in the film industry. The Queen actress has been at loggerheads with actresses like Taapsee Pannu, Alia Bhatt, Swara Bhasker. Today, she hit back at Jaya Bachchan for criticising her in the Parliament. Now, she has also slammed Urmila Matondkar, who had not only criticised her but also imitated her mockingly. Retorting to this, during an interview with Times Now, Kangana went as far as calling Urmila a 'soft-porn star', which is a low blow. Kangana also questioned Urmila's acting skills. Urmila Matondkar Slams Kangana Ranaut, Asks Her to Start the Attack on Drug Problem in Her State.

Urmila had hinted that Kangana might be vocal to get a ticket from Bhartiya Janata Party. Urmila has herself been a former politician, who resigned from Congress after serving for 5 months.

Reacting to this, "I saw one very derogatory interview given by Urmila Matondkar. She was teasing me through the interview. She was making a mockery out of my struggles. Attacking on the basis that I am trying please BJP for a ticket. One doesn't have to be a genius to figure that, for me, it's not very difficult to get a ticket. I don't have to play with my life or get my property ruined." Kangana Ranaut Responds to Jaya Bachchan's 'Thali' Remark, Claims Roles, Item Numbers in Bollywood Used to Be Given By Sleeping With the Hero.

Kangana hits out at @UrmilaMatondkar over her remark on ‘BJP ticket’.

I don't have to work much to get a ticket: Kangana Ranaut (@KanganaTeam), Actor tells Navika Kumar on #FranklySpeakingWithKangana. pic.twitter.com/wrlzgr4zB7

Urmila has featured in some of the finest films made in India including Ek Hasina Thi, Pinjar, Satya, Rangeela, Bhoot. She has been a fan-favourite and critically acclaimed actress, just like Kangana.

(The above story first appeared on LatestLY on Sep 16, 2020 11:29 PM IST. For more news and updates on politics, world, sports, entertainment and lifestyle, log on to our website latestly.com).