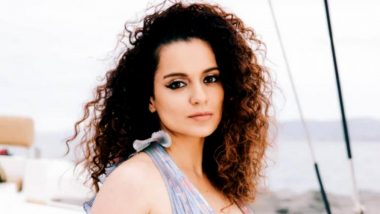 Kangana Ranaut is in yet another legal soup after Bandra magistrate court ordered to file an FIR against her. Reason? Her attempts to create hatred and communal tensions between Hindus and Muslims. The complaint was filed by a casting director and fitness trainer Munnawarali Sayyed against Kangana and her sister Rangoli Chandel wherein he suggested that the sisters should be booked under various sections of the Indian Penal Code namely 153A (Promoting enmity between different groups), 295A (Deliberate and malicious act to outrage religious feelings of any class by insulting their religion) and 124A Sedition. Kangana Ranaut In Legal Soup! Karnataka Police Files FIR Against The Actress For Her Tweet On Protests Against Farmers Bills.

In his formal complaint, he has alleged that Kangana has been continuously defaming the Bollywood industry and is portraying people working there as “drug addicts, communally biased people, murderers etc." In his complaint, he has pointed out several tweets by the actress on the Sushant Singh Rajput’s Case, the sadhus lynching in Palghar and her tweets calling Mumbai PoK. Kangana Ranaut Office Demolition Case: Sessions Court Grants Anticipatory Bail to Journalist Who Was Booked For Allegedly Causing Disturbance.

The complainant has further requested an investigation into the matter to find out the real motive behind her hate tweets and who are the people backing such hatred to create communal tensions and sentiments against the government. After hearing the plea, the Court in its verdict said, “Prima facie on perusal of the complaint and submissions I found a cognizable offence has been committed by the accused. A thorough investigation is necessary by an expert."

This would be the second FIR registered against the actress, the first being for her comments on farmers protesting against the controversial farm laws passed by the government.

(The above story first appeared on LatestLY on Oct 17, 2020 02:04 PM IST. For more news and updates on politics, world, sports, entertainment and lifestyle, log on to our website latestly.com).