Kartik Aaryan's Next 'Dhamaka' Was Shot In Just 10 Days, We Tell You How! (LatestLY Exclusive)

The thriller will witness Karthik Aaryan play a journalist named Arjun Pathak, who covers the live broadcast of a terror attack in Mumbai. 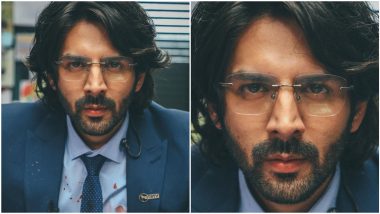 Kartik Aaryan's forthcoming film Dhamaka is all set to stream on Netflix. Neerja famed director Ram Madhvani, who is also relishing the success of Aarya, is helming the project. The thriller will witness Karthik Aaryan play a journalist named Arjun Pathak, who covers the live broadcast of a terror attack in Mumbai. He is on the brink of losing his job as well as his repute, that's when a series of events unfold in just three hours is what the film is based on.

In fact, with the series of ups and downs and events that follow, Kartik's character must make a critical choice between his future career or the humanist in him. Now that sounds interesting, doesn't it? What is even more interesting is the fact that this movie was shot in just 10 days! A little birdie who is keeping a close watch on the making of Dhamaka informs us that Madhavani used the latest in technology to complete the project in the said duration. Dhamaka Teaser: Kartik Aaryan Is All Set To Reveal The Truth, Movie To Release On Netflix (Watch Video)

"Ram Madhavani is a perfectionist who doesn't miss a single detail. His diligence and his knowledge in terms what technology can offer is amazing. For Dhamaka, the national award-winning filmmaker has used 7 cameras to capture every scene. So instead of going for the close-up, mid-shot, OTS or extreme close-up in separation, Ram sir captured raw emotions in one go. He had orchestrated the whole pre-production work down to minute details  much before the shoot." Informs the source.

"The narration and the script reading for this project happened over the zoom calls. All locations were booked and no last-minute changes were done on any front. In fact, the ditcate that was also given to the actors that there will be a maximum three to four takes to save the duration as indded the cost of the unit employed.  As a result, most of the scenes and sequences were done in 2 to 3 takes." added the source. Kartik Aaryan Workout and Diet: Fitness Regime That Helps The 'Love Aaj Kal 2' Actor Maintain His Sculpted Body

The director said in a statement that he was eager to work with Aaryan, the star of Pyaar Ka Punchnama and Sonu Ke Titu Ki Sweety. "Every day Kartik gave his all to the 360 degree system with which I work. His full involvement, his passion, his precise calibration as an actor is something that I hugely respect. It would be great to collaborate with him again because he made my work better," he added.

(The above story first appeared on LatestLY on Mar 15, 2021 04:12 PM IST. For more news and updates on politics, world, sports, entertainment and lifestyle, log on to our website latestly.com).