Laal Singh Chaddha features Aamir Khan and Kareena Kapoor Khan in the lead and Mona Singh in supporting role. South actor Vijay Sethupathi would also be making his debut in Hindi Cinema with this movie. 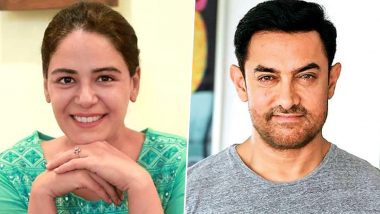 Laal Singh Chaddha is the upcoming flick directed by Advait Chandan. It is the remake of the Hollywood classic Forrest Gump that featured Tom Hanks in the lead role. Laal Singh Chaddha features Aamir Khan and Kareena Kapoor Khan in the lead and Mona Singh in supporting role. South actor Vijay Sethupathi would also be making his debut in Hindi Cinema with this movie. This movie marks the reunion of Mona with the film’s lead actors after 3 Idiots. In an interview with a leading tabloid, the actress has shared how Aamir Khan did not want to put the team at risk and complete the film’s shoot. Kareena Kapoor Khan Looks Stunning In This BTS Pic From Laal Singh Chaddha.

We all saw pictures of Aamir Khan and Kareena Kapoor Khan from the sets of Laal Singh Chaddha while they were shooting at Amritsar and Chandigarh. Mona Singh shares the team was supposed to head to the capital to for their next schedule but instead returned to Mumbai owing to the coronavirus scare. Due to the lockdown imposed across the country in the wake of coronavirus pandemic, several makers had to suspend the shooting of their films until further notice.

Regarding the shooting of Laal Singh Chaddha, Mona Singh was quoted as saying, “After our Amritsar and Chandigarh schedules, we were supposed to head to Delhi for the next stint. But Aamir sir decided to return to Mumbai. He didn’t want to put the unit at risk. We have about 10 to 11 days of shoot left.” Mona also shared how she helped Aamir to master over Punjabi language. About it she further stated, “We have a lot of Punjabi dialogues in the film. So, Aamir sir used to ask me the meaning or pronunciation of certain words and I helped him out.” Aamir Khan Extends His Support to PM Cares and Maharashtra Chief Minister Relief Fund, Will Also Help Daily Wage Earners Working on Laal Singh Chaddha.

Laal Singh Chaddha is scheduled to hit the big screens during the time of Christmas this year. Due to the lockdown imposed, rumours were rife that the makers might postpone the film to April 2021, then it was clarified that the team will release the film in theatres as per the schedule.

(The above story first appeared on LatestLY on Jun 13, 2020 08:30 AM IST. For more news and updates on politics, world, sports, entertainment and lifestyle, log on to our website latestly.com).