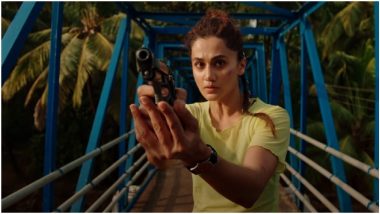 For those who are not aware of this, the new Bollywood film on Netflix - Looop Lapeta is the official remake of the 1998 German cult hit Run Lola Run. Director Aakash Bhatia borrows the premise and the narration style of the original, but adds more human elements, Hindu mythos and a couple of interesting suplots, including a heartwarming take on LGBTQ relationships. Looop Lapeta stars Taapsee Pannu and Tahir Raj Bhasin in the lead delivering their quirkiest performances in recent times. Looop Lapeta Movie Review: Taapsee Pannu, Tahir Raj Bhasin's Netflix Film Is a Smart, Fun Remake of Run Lola Run.

Looop Lapeta, set in Goa, is about a former sprinter Savi (Taapsee Pannu), whose sports career crashed after an injury, having the worst birthday. She realises she is pregnant with her boyfriend's baby, the very same boyfriend Satya (Tahir Raj Bhasin) who has fumbled a deal for his crime lord of a boss and has made a loss of Rs 50 lakhs, which if he doesn't return in 90 minutes, the boss might kill him. Savi has to do her greatest run, that not only is life-changing but also inexplicably includes time-loop dynamics.

So what happens in the ending? Before we go ahead deconstructing the climax, let's drop the usual warning - MAJOR SPOILERS AHEAD. Do not read if you haven't watched Looop Lapeta and are planning to do so.

Before we go ahead and explain the finale, let's talk about how the title itself has been a spoiler.

Of course, the title blatantly spoils the fact that the movie involves time-loops, even if you have not watched the original German movie. But how many loops? The Tamil movie Maanaadu that came out last year had multiple ones that even the protagonist lost count of. However, in Looop Lapeta, there are just three time loops before Savi gets her happy ending. The three o's in the title did warn us of that, only we didn't notice!

Looop Lapeta takes influences of the Satyavan-Savitri mythological story from the Mahabharata in its leads' love story. Not only are their names inspired by the mythological couple, Satya even narrates the tale to Savi in flashback episodes to drive this point. Like Savitri who brought her husband back from the gates of death by tricking Yama the God of Death, even Savi has to save her lover from being killed by Victor (Dibyendu Bhattacharya), who drives in a car with what are two black horns. If Savitri tricks Yama into relinquishing her husband by asking for a boon of having hundred children, Savi was already pregnant with Satya's kid, even though she believes her boon has been the extra money she won by gambling that they didn't need to give to Victor. So in effect, Savi brought Satya back from death, literally at that, with Time in her favour.

Time was not helping Savi only to save her irresponsible stoner of a boyfriend, it was actually helping her exorcise her own personal demons and be a better person in the process. The three loops could stand-in for her varying mental states. The first loop could denote her desperation, the second loop her bitterness and anger, and the third loop her level-minded acceptance of the situation and then repatriation.

By the time the third loop ends, not only is Savi a more cheerful person, who has had the best run of her life, but she also leaves many people happy in the process. She accepts her father's gay boyfriend, thereby silencing the homophobe within herself. She proposes marriage to Satya, after once rejecting his proposal, using her mother's ring. She had reunited two lovers - Jacob (Sameer Kevin Roy), and Julia (Shreya Dhanwanthary), and even gave some of her gambling winnings to them (Do note that it is the number '8' that was lucky for Savi, whose loop-like appearance can't be ignored). Why even Victor got his money back, and he has his turkey ready. Looop Lapeta Song Nirvana: New Track From Taapsee Pannu and Tahir Raj Bhasin’s Netflix Film Is Quite Bonkers! (Watch Video).

Even though she didn't directly affect them in the third loop, the events that transpired  also made a few more people happy. Julia's jilted fiance got married to a girl who loved him back. Chadha and his two sons might get in trouble with the cops for shooting at them, but the incident brought them together as seen when Chadha was protecting his idiots kids from the firing. Even the inspector finally got to eat the fish he has been trying to buy, but then couldn't, because he kept chasing Savi in the previous loops. Why even the paraplegic old man that Savi was taking care of, left the confines of his wheelchair and had started walking. We all love happy endings, and this movie gave us quite a few of them!

For the uninitiated, "In chaos theory, the butterfly effect is the sensitive dependence on initial conditions in which a small change in one state of a deterministic nonlinear system can result in large differences in a later state." That in simple speak means a small action could create a larger repercussions at some point of place or time or state. Like a butterfly flapping its wings in one part of the world could lead to a tornado elsewhere.

In the third time-loop, Savi's determined approach to rectify all she did wrong, starts with her letting a butterfly out of her bathroom window. The very same butterfly gets in Victor's car, and begins to bother him while driving, before he applies the brakes and stops himself from nearly killing Savi and Satya who were hugging in the middle of the road. It is the film trying to say how Savi's actions created a ripple effect that saved them from the doom that would have destroyed them both, which in two timelines, happened! The fact that Victor drives a car that is red in colour, with red often being a symbol of danger, not to mention the aforementioned black horns, is yet another a metaphor of the couple's narrow escape from death.

The Sequel Bait - Sly Ode to the Original

Wonder who the girl with the bright red-haired girl who Savi runs into at the casino? That's the film paying ode to Run Lola Run, where its protagonist, played by Franka Potente, had similar red hair. Looop Lapeta: Did You Know Run Lola Run, The Inspiration Behind Taapsee Pannu’s Film, Was Already Remade in Bollywood?

Looop Lapeta ends with a sequel stinger where Satya stumbles upon the stoner who has his bag of cash, and chases after him. This is a nod to the ending of RLR, where Lola's boyfriend manages to retrieve the money from the hobo who accidentally discovers the bag.

So what do you think of Looop Lapeta? Share your thoughts about the film's ending in the comments section below.

(The above story first appeared on LatestLY on Feb 04, 2022 10:01 PM IST. For more news and updates on politics, world, sports, entertainment and lifestyle, log on to our website latestly.com).