The chemistry between Emraan Hashmi and Yukti Thareja is amazing and will make you fall in love with them instantly. The music of "Lut Gaye" is given by Tanishk Bagchi while the song in composed by Ustad Nusrat Fateh Ali Khan. 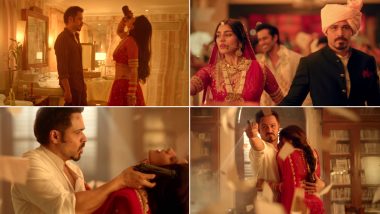 Emraan Hashmi has been away from the screens for quite some time now. The actor who was last seen in Why Cheat India and has been busy shooting for his upcoming projects which included a music video. The actor collaborated with T-Series for a new project and is finally ready to sweep the fans off their feet with this track. Titled "Lut Gaye", the songs is an emotional track and seeing Emraan in a romantic avatar is surely going to be a treat for all his fans. The song also features debutant Yukti Thareja as Hashmi's lady love and their chemistry is something to talk about. Emraan Hashmi Recalls Working With Oscar-Winner Danis Tanovics in Tigers, Says ‘It “Helped Me Polish My Craft’.

The song begins with Emraan running on the streets with a wound on his chest. He reaches a hotel room where Yukti is staying. Dressed in a bridal avatar, the actress is crying her heart out as she does not want to get married. Seeing the wounded Emraan, she gets up and helps him in nursing the wound. She then asks her to dress up in wedding clothes and disguise himself as a family member. She gives him the car keys so that he can escape the goons that he was running from.

Yukti also decided to runs away with him and reaches a police station. Scared that she will get caught, Yukti hides behind Emraan only to later find out that he is a police inspector. The two wait for things to cool down and a scene where we see the two gettings married comes up as Emraan imagines to spend life with her. But is a love story even a love story if it doesn't have a tragic path? Check out the song to know what happens next?

The chemistry between Emraan Hashmi and Yukti Thareja is amazing and will make you fall in love with them instantly. The music of "Lut Gaye" is given by Tanishk Bagchi while the song in composed by Ustad Nusrat Fateh Ali Khan. Jubin Nautiyal has crooned the soulful track, adding magic to the song.  The lyrics of "Lut Gaye" are penned by Manoj Muntashir. The video is directed by Radhika Rao and Vinay Sapru. Bihar Student Names Emraan Hashmi, Sunny Leone as Parents on Admit Card.

Apart from this, Emraan Hashmi has been roped in to play the villain in the third instalment of superstar Salman Khan-led Tiger franchise. Tiger 3 will also mark Emraan's first collaboration with Salman Khan and Katrina Kaif. Also, it's for the first time that the actor is working on a YRF project. Hashmi will also be seen in Sanjay Gupta's Mumbai Saga and Chehre, which also stars Amitabh Bachchan.

(The above story first appeared on LatestLY on Feb 17, 2021 03:06 PM IST. For more news and updates on politics, world, sports, entertainment and lifestyle, log on to our website latestly.com).