The Dil Se actress took to the Twitter to write, "Thank you for keeping the dignity of our small nation.." 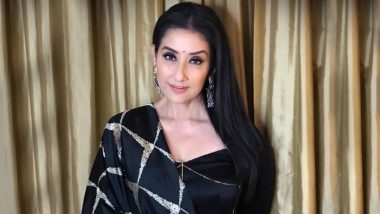 Bollywood actress, Manisha Koirala is a fresh controversy. The actress' latest tweet has created a stir on social media, leaving her Indian fans offended. The tweet comes in regards to the latest controversy over the new updated map of Nepal that claims the Indian territories as its own. Manisha, who hails from Nepal, tweeted her support to this decision of the Nepal government. That attracted flak from her Indian fans. Nepal Releases New Map Amid Border Disputes With India, Shows Lipulekh, Kalapani and Limpiyadhura As Part of Its Territory.

The Dil Se actress took to the Twitter to write, "Thank you for keeping the dignity of our small nation..we all are looking forward for a peaceful and respectful dialogue between all three great nations now." Check out the tweet below.

Thank you for keeping the dignity of our small nation..we all are looking forward for a peaceful and respectful dialogue between all three great nations now 🙏 https://t.co/A60BZNjgyK

As she posted this tweet, she received negative comments from the fans in India. They pointed out how the fans loved her Bollywood films and performances in Indian films and yet she came out in support of Nepal. Here are a few tweets.

Another Fan Tweets To Manisha

Manisha very soon ,Nepal will b under capture (Mount Everest) of China, Now India shouldn't help Nepal. and India should strongly opposes ,Map which is release by Nepal,

What is surprising that people like you who only gained from India are raising Dignity issue as if India mistreated Nepal.

Were you aware of this word 'dignity' when you choose India instead of your 'small nation' for education and carrier #ManishaKoirala ??? pic.twitter.com/yQuOmsbwU7

The Nepal cabinet approved of this new map that shows Lipulekh, Kalapani and Limpiyadhura as parts of Nepal. “The new map incorporates northern, southern, western and eastern International borderlines as well as includes the political and administrative arrangements," said Yuba Raj Khatiwada, Nepal's Minister of Finance and Information and Communication.

The 49-year-old actress is yet to react to the criticism she received for the tweet. She has worked in noted Bollywood movies like Dil Se, 1942: A Love Story, Bombay, Indian, Gupt, Mann, Lajja, Sanju, Lust Stories to name a few.

(The above story first appeared on LatestLY on May 20, 2020 11:06 PM IST. For more news and updates on politics, world, sports, entertainment and lifestyle, log on to our website latestly.com).