As per new reports the former Miss World has already bagged her second Bollywood outing even before the release of her debut movie. Manushi will share the screen space with Vicky Kaushal in YRF's next comedy. 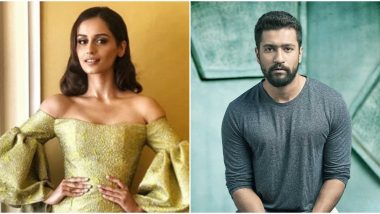 Even before her debut movie, Prithviraj has hit the big screen, former Miss World, Manushi Chhillar has apparently bagged her second B-town outing. She's looking forward to her pairing with the current sensation, Vicky Kaushal and it's a comedy backed by Yash Raj Films. The official announcement is expected to come out on September 27, when YRF plans to release its huge list of upcoming releases to mark its 50th-anniversary celebration. While there were reports of Vicky coming on board for the production house's next, his stint with comedy is the latest update and would be refreshing to witness. Shah Rukh Khan's YRF Actioner 'Pathan' To Release On Gandhi Jayanti 2021?

Speaking about roping Manushi for this Kaushal starrer, a trade source in his conversation with Mid-Day said, "Manushi had been zeroed in on for Prithviraj last year after she delivered a fantastic audition. It was the same audition tape that helped her bag this film, which is likely to be helmed by Dhoom 3 director Vijay Krishna Acharya. The decision to bring Manushi on board was taken last week as head honcho Aditya Chopra was confident that her pairing with Vicky will grab eyeballs." YRF to Announce Mega Project Slate on Yash Chopra's Birth Anniversary, Projects May Include Collaborations with Shah Rukh Khan, Ajay Devgn and Others.

Besides Vicky and Manushi's next, YRF is also expected to announce its other major releases that reportedly also includes Shah Rukh Khan - Deepika Padukone's Pathan and Salman Khan's Tiger 3. The announcement was earlier supposed to come in March but got delayed amid the COVID-19 pandemic. Aditya Chopra, YRF's head honcho now plans on making the announcement on Yash Chopra's birthday on Sep 27, 2020.

(The above story first appeared on LatestLY on Aug 19, 2020 08:26 AM IST. For more news and updates on politics, world, sports, entertainment and lifestyle, log on to our website latestly.com).