Meel Patthar aka Milestone is a social drama co-written, edited and directed by Ivan Ayr. The movie stars Suvinder Vicky and Lakshvir Saran. Milestone is streaming on Netflix. 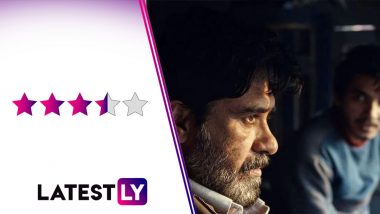 Meel Patthar (Milestone) Movie Review: When we first meet Ghalib (Suvinder Vicky) in Ivan Ayr's sophomore feature film Meel Patthar, he has already completed a milestone. Working as truck driver for a goods company, his is the only vehicle in there to have completed 5 lakh miles on the road. Ghalib merely shrugs off this news; in some time, we know why. He might know that, like how the truck wears down as it keeps accumulating the miles, even he is on the verge of a tear down. In his view, his milestone is his transitioning point, where he could lose the steering of his own life. Milestone Trailer: Soni Director Ivan Ayr's Netflix Film is a Moving Tale of a Truck Driver Losing Track of His Life.

Which also happens in that opening scene itself. Thanks to strike by the loaders, Ghalib sprains his back carrying one of the goods to his truck. A couple of scenes later, he finds out one of the drivers was thrown out of the job because he had difficulty driving in the night. Then he is also given an 'intern' in Pash (Lakshvir Saran) who is much younger and is most likely going to replace him at the steering wheel.

Meel Patthar's protagonist is a loner whose livelihood has been his whole life. He had even found his wife through one of the road trips; she recently died but not before their marriage had already began to crumble. The camera refuses to leave him even when some of the major events that keep worrying him never get to be shown to us. All we see get to see is Ghalib's stoic reaction to these incidents (some of them happening offscreen) and make us sense his weariness and terseness to these changes. Like the grey frames of the film, Ghalib's life isn't as colourful as his name may sound.

Ivan Ayr (who also co-wrote and edited the film) doesn't need to spell everything out to us. And yet, his film allows a stark commentary on the situation of the underprivileged in this country, that wasn't much better before the pandemic struck (though the film is set in 2020, Meel Patthar doesn't touch upon the current crisis).

Here, we have a main character who fears a life that doesn't involve what he has been doing for years. I get the feeling that Ghalib wasn't even this worried when his wife passed away, or when her family coerces him to pay compensation. It is the vacuum that scares him, the worry of someone younger replacing him, that comes in the form of Pash. Well, don't we all?

In subtle nods, Ivan Ayr breaks down the frailties of our society. There is a scene where a lift shuts down, leaving the residents in a state of worry and chaos. It is heartbreaking to find out the reason behind the the loaders' strike and even more so, in how it concludes. My favorite scene in the film is when a loader makes Ghalib question his own 'privilege', when the latter confronts him over a spot of violence. The corruption in the system, the unwavering indifference of  capitalism, the fear of unemployment even in the youngsters are brilliantly captured in the subtleness of the narrative.

I was a huge fan of Ivan Ayr's previous film, Soni, another social commentary that focussed on the misogyny and sexism in the police department, and also society in general. Meel Patthar does hold back on some of the ferocity of Ayr's previous film, mostly because it doesn't have an angry protagonist, only an anguished one. I wish Pash wasn't treated as a wrench in Ghalib's story; I wanted them to bond like the two cops in Soni did. Instead it only leads to the one bout of violence from an otherwise restrained Ghalib, that takes a further tragic turn. Soni Movie Review: Netflix's Latest Offering is a Brilliantly Acted, Incredible Tale Of Friendship Set in a Grim Reality.

But like Soni, Meel Patthar doesn't go for a bleak ending, but rather an acceptable one for its miserable protagonist, even if it comes at the cost of another's misfortune.

- A Stoic Meta-Commentary on Our Society

- Takes Some Time to Get Going

If you have admired Soni, then you would not be disappointed with Ivan Ayr has to offer in Meel Patthar. It may not be the reality break that you need, but it is definitely the reality check that you might have chosen to ignore. Or maybe, even living in. Meel Patthar aka Milestone is streaming on Netflix.

(The above story first appeared on LatestLY on May 07, 2021 08:59 PM IST. For more news and updates on politics, world, sports, entertainment and lifestyle, log on to our website latestly.com).