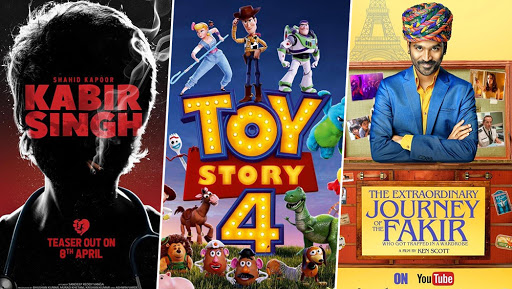 On June 21, three releases will clash at the Indian box-office including a solo Bollywood film and two international outings. The big Bollywood release of the week is Shahid Kapoor's Kabir Singh, an official remake of the Telugu hit film Arjun Reddy. With its trailer gaining all the attention from Bollywood fans, it might open with big numbers in the opening weekend. The next big release is Tom Hanks's animated Hollywood film Toy Story 4. It is the fourth and final instalment of the popular Toy Story franchise which kick-started with 1995 film Toy Story. Toy Story 4 is a sequel to the 2010 film Toy Story 3. Interestingly, the film also stars John Wick 3 fame Keanu Reeves, who features in his first ever Disney project. Toy Story 4 Movie Review: Critics Love the Film's Visual Appeal and Humour But the Lacklustre Story Disappoints

Tamil superstar Dhanush would be marking his international debut with The Extraordinary Journey of the Fakir. The film is an official adaptation of the novel of the same name by Romain Puértolas. The Extraordinary Journey of the Fakir has already won two international accolades including The Ray of Sunshine award at the 2018 Norwegian International Film Festival and The Best comedy film award at 2019 Barcelona Sant-Jordi International Film Festival. This means there is a lot to look forward in Dhanush's critically acclaimed comedy-drama. Shahid Kapoor: I Believe There Is a Kabir Singh Inside Everyone

Kabir Singh is helmed by Sandeep Vanga, the director who has made the original Telugu hit Arjun Reddy on which this film is based. While the original film featured Vijay Deverakonda and Shalini Pandey in titular roles, Kabir Singh stars Shahid Kapoor in the lead with Kiara Advani cast as his love interest. The supporting cast includes Arjan Bajwa, Aanchal Chauhan and Suresh Oberoi. The film revolves around a short-tempered surgeon who is on the course of self-destruction. He gets addicted to drugs and alcohol when his girlfriend leaves him marrying someone else.

Josh Cooley-directed Toy Story 4 dwells around Woody (Tom Hanks) and his gang as they are all set for an exciting road trip journey. The film also stars Keanu Reeves who lends his voice to Duke Caboom. On November 2018, Tom Hanks revealed that the ending was an emotional moment. He also added that he couldn't face the crew while recording his final lines because he got emotional with them.

The Extraordinary Journey of the Fakir

The Extraordinary Journey of the Fakir is an Anglo-French language comedy-drama directed by Ken Scott. The film stars Dhanush, Berenice Bejo and Erin Moriarty in the lead roles. It is shot in the exclusive picturesque locations of Brussels, Paris and Rome tempting to be a visual delight at the same time. The story is about an ordinary middle-class boy Ajatashatru Lavash Patel (Dhanush) who turns to a conman who convinces people that he is blessed with magical power. After his mother's sudden demise, he moves to Paris to search his unknown father. During the festival run, the movie has been praised for its situational comedy, unusual themes and Dhanush's performance.