Not Only Kriti Sanon’s Mimi, But These 7 Hindi Films Already Broke Stereotypes With Portrayal of Surrogacy

The recent OTT-released film 'Mimi' is getting a lot of admiration from the audience for the portrayal of the complex subject of surrogacy in a nuanced way. 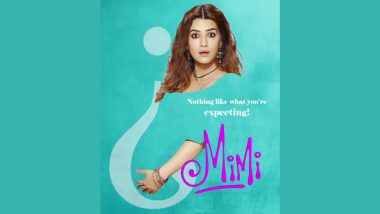 The recent OTT-released film 'Mimi' is getting a lot of admiration from the audience for the portrayal of the complex subject of surrogacy in a nuanced way. In the film, Kriti Sanon plays the role of a dancer who agrees to be a surrogate mother for an American couple in exchange for Rs 20 lakh. The film is an adaptation of the Marathi film 'Mala Aai Vhhaychy' (I Want to Be A Mother), that released in 2010. Mimi: Kriti Sanon Opens Up About Her Weight-Gain for Netflix Film, Says ‘I Told Myself I Won’t Do This Again’.

Before Mimi, several other Bollywood movies have also dealt with the concept of surrogate motherhood. IANS takes a look at the other Hindi films that tackle the subject of surrogacy: Before Mimi, Here’re Five Other Bollywood Movies Made On Surrogacy And Assisted Pregnancy.

The 2019 film 'Good Newzz' is a comedy-drama based on the concept of in-vitro fertilisation. Starring Akshay Kumar, Kareena Kapoor Khan, Kiara Advani and Diljit Dosanjh it is about a hilarious swap that happens when the two couples attempt surrogacy. Directed by Raj Mehta, the film revolves around two couples with the same surnames pursuing in-vitro fertilisation and waiting for their upcoming babies. However, trouble ensues when they find that the sperm of each couple has been mixed with the other.

Shoojit Sircar's romantic-comedy 'Vicky Donor' starring Ayushmann Khurrana and Yami Gautam with Annu Kapoor in a pivotal role, is a story about the edgy adventures of a sperm donor. Released in 2012 the concept is set against the background of sperm donation and infertility within a Bengali-Punjabi household. Ayushmann's character broke many stereotypes as he played the role of a massively fertile sperm donor.

In Onir's critically acclaimed anthology 'I Am', a segment titled 'I Am Afia' is on the subject of surrogacy. Starring Nandita Das and Purab Kohli, the film was released in 2010. The film portrays a single woman who desires to be a mother but is scared of how society will treat her unconventional journey. Unable to trust or even wait for a man, her search is defined with her identity made whole through the singular feminine experience of motherhood.

Meghna Gulzar, daughter of lyricist Gulzar and actress Raakhee, made her directorial debut with 'Filhaal' in 2002. The film was ahead of its time when romantic genres were only accepted in Bollywood. Meghna boldly took on the sensitive topic of surrogacy in a tender manner. The film gives a nuanced portrayal of the surrogacy process, and simultaneously, shows how all this complicates interpersonal relationships and how motherhood affects women. Tabu and Sushmita Sen are seen in powerful roles as best friends who are always there for each other. While Tabu isn't able to conceive due to birth complications, Sushmita offers to be their surrogate mother. As the movie progresses, it shows conflicts between the two best friends.

Starring Salman Khan, Rani Mukerji, and Preity Zinta in the lead roles, this film reached a wider audience due to the multi-starrer cast and commercial viability. Directed by Abbas-Mustan, released in 2001, the movie has a melodramatic approach to surrogacy, while its storyline's emphasis on having a biological child. A married couple hires a sex worker to be their child's surrogate mother. However, things get difficult for the couple when the prostitute falls in love with the husband and insists on keeping the baby. The film was inspired by the story of 'Doosri Dulhan', one of the first films made on surrogacy.

This 1983 film was way ahead of its time. The film revolves around a childless couple who hire a sex worker to carry their child. Directed by Lekh Tandon, the film had popular actors Shabana Azmi, Sharmila Tagore, and Victor Banerjee in lead roles. The film wasn't accepted well at the box office, as it would be if released now. In the film, a childless couple brings home a sex worker to bear a child for them. The film was inspired by the American film 'The Baby Maker'.

(The above story first appeared on LatestLY on Jul 31, 2021 06:02 PM IST. For more news and updates on politics, world, sports, entertainment and lifestyle, log on to our website latestly.com).