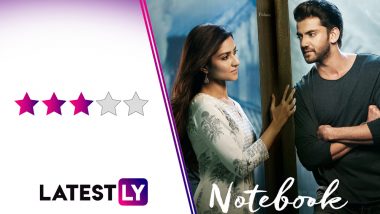 With Notebook, Bollywood superstar Salman Khan launches two more newcomers in Bollywood, whether you asked for it or not. Pranutan Bahl, the daughter of actor Mohnish Behl, and Zaheer Iqbal play the leads in this romantic drama, that is an official remake of the Thai film The Teacher's Diary. When it comes to launching newcomers in a movie, Salman Khan, who is usually box office gold, strangely couldn't connect with the box office. And neither has any of his productions, apart from the utterly delightful Chillar Party, managed to win over the critics. So can Notebook, directed by Filmistaan and Mitron fame Nitin Kakkar, change the tide for Salman Khan Films? Ripples are generated here, but what we needed was a consistent large wave! Jag Ghoomeya from Sultan, Hangover from Kick, Main Taare from Notebook: Which Song Sung by Salman Khan is Your Favourite?

Kabir (Zaheer Iqbal) is discharged from the army after a landmine incident that kills a kid. He takes up a job as a teacher and gets posted in a desolate hamlet in Kashmir. The school has only half a dozen kids with no proper amenities, including electricity and drinking water. What's more, frogs, snakes and sometimes even dead bodies land up in the school. Kabir initially also doesn't get along with the kids, who equally despise him.

In the interim, he finds a notebook that has been a diary for Firdaus (Pranutan Bahl), the previous teacher in the school. Firdaus had been transferred here from her old posting after she refused to remove a tattoo. As he goes through her writings, he realises that Firdaus got a sense of freedom teaching the kids there and they loved her back. Her diary made him open himself up as a person and become a caring teacher. In the process, he falls in love with Firdaus through her writings, despite the chance that she could be married by now.

Among all the love stories Salman Khan has made under his banner, Notebook could be the most harmless of the lot. The premise is definitely interesting in how two strangers could fall for each other without any form of direct communication. The idea of setting the movie in Kashmir is a brilliant move. The quaint charm of the lovely lakes, captured in all its glory by Manoj Kumar Khatoi (cinematography), makes the movie easy on the eye.

The first half that sets up this unusual love story is breezy, marred occasionally by a randomly inserted action scene (whose only purpose is to show Iqbal has the action chops, Bhai's blessings of course). Then there are the kids, all played by naturally talented actors, who make the proceedings delightful. Firdaus and her musings also make for an interesting watch. And then towards the interval, arrives a storm, literally, and we are really curious to know what is left in the aftermath.

Post-interval, though, I realised that the storm was merely stuck in a tea-cup, as both the pace and the energy take a hit in the second half. While Kakkar tries his best to make things as arresting as possible, the intertwining of both Kabir and Firdaus' stories needed better writing and focus. The premise moves in a predictable pattern and we know how things would end in this love story. Plus, there are plenty of loopholes in the narrative that cannot be ignored, just like how badly Kabir does simple mathematical equations. Which school job application forms do not ask for a teacher's phone number in the era of cellphones? Half the lead pair's struggles would have ended if this plothole had been cemented. Notebook BTS Video: We Need a Moment to Talk about Pranutan Bahl and Zaheer Iqbal’s Crackling Off-Screen Chemistry.

The writers also throw in an idea that Kabir and Firdaus were connected in their childhoods, which seem unnecessary. Lazy writing is also to be blamed on how conveniently Notebook figures out how to deal with Firdaus' fiance. The subplot involving a brilliant student and his suspected militant father only seems to be added to give some tension in the climax, and also because, the film is set in Kashmir.

The music by Vishal Mishra is pleasant, especially "Bumro" song. However, Salman Khan's autotuned singing in "Main Taare" stands out like a sore thumb.

Both the debutants, Zaheer Iqbal and Pranutan Bahl, are quite decent in their debut performances. At least, they feel like better actors that Salman Khan has launched till now. Though I have to add that Notebook is slightly partisan in putting its spotlight more on Zaheer rather than Pranutan. While the lead actors are good, it is the sprightly kids that steal the show from them on many occasions, making us wish the movie was more about them.

- A Breezy First Half

- Cinematography and The Short Runtime

- A Skewered, Unfocussed Second Half

- The Love Story Lacks Punch In These Portions

Notebook has an interesting unusual love story to say, with two capable leads in Zaheer and Pranutan, and a bunch of adorable kids. With tighter writing, the makers could have had a wonderful, soul-enriching love story in hand. Still, Notebook is watchable for the performances, a decent romance and a beautiful Kashmir.

(The above story first appeared on LatestLY on Mar 28, 2019 07:53 PM IST. For more news and updates on politics, world, sports, entertainment and lifestyle, log on to our website latestly.com).