Pagglait is a dramedy directed by Umesh Bisht and produced by Ekta Kapoor. The movie stars Sanya Malhotra, Shruti Sharma, Ashutosh Rana and Sayani Gupta. Pagglait is streaming on Netfix. 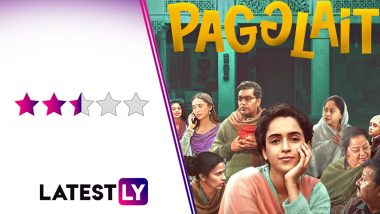 Pagglait Movie Review: There is a scene in Pagglait, directed by Umesh Bisht, that hilariously reminded me of a Malayalam film, Vellimoonga. In that film, Biju Menon's character, a wannabe politician, visits a deceased's house to show his presence, and once he is done with that, he leaves the place with his crony. While the dead man's sister is lamenting loudly over her brother's corpse, the protagonist reverses his car and suddenly the song "Ramba Ho Ho" reverberates across the courtyard, leaving an awkward silence behind. Sanya Malhotra on Netflix Film Pagglait: I Used to Write a Lot to Prep Up For My Role of Sandhya.

Similarly in Pagglait, a doorbell that plays "Ooo La La Ooo La La" in a house where a death has happened, considering the whole family is going through the initial phase of mourning. But that doorbell isn't the only awkward aspect in this bereaved household. There is Sandhya (Sanya Malhotra) too, the deceased Astik's widow.

As she confesses to her best friend Nazia (Shruti Sharma), she is not feeling the grief associated with losing her husband of five months. Meanwhile, the rest of her family are either in grief, like Astik's parents (Ashutosh Rana and Sheeba Chadha). Or trying to take charge of the mourning activities, like the bullying Tayaji (Raghubir Yadav). Or engaging in gossiping or belittling their own kin behind their backs. You know, typical bereaved family drama shite.

Meanwhile, Sandhya, still not able to fathom her indifference to what the rest of her family is going through, discovers a secret of her dead husband that changes her perceptions towards her own short-lived marriage. As well as her attitude towards her life till now.

Pagglait comes a couple of months after a delightful but inconsistent Ramprasad Ki Tervi that also has a disjointed family dealing with the funeral rites of a family member. The death family Politics, if I can call it as such, was also a prominent theme in two of my favourite Malayalam movies (sorry to keep dragging the exemplary cinema from my home state)... Anjali Menon's underrated debut Manjadikuru and Lijo Jose Pelissery's brilliant Ee Ma Yau. Pagglait shares certain plot points from these movies, like being set over the 13 days of mourning, haggling over finances and seeing genuine grief lose over formalities. Not to mention, even having little romances, with some incestuous context, blossom even in the shadow of death still lingering on.

However, Pagglait, while dealing with its own separate arcs and subplots, keeps the main focus on Sandhya's dilemma and the strange ways she finds her wings even if it happens after the loss of her husband. How she reconsiders her life-goals, while dealing with the dogmatism and selfishness of the people around her - including her mother - takes for a very fascinating start, beginning as she tries to understand her hunger pangs. While her track - even even the trailer suggested so - gave the idea that she seeks her own life-path, while we figure out if we made mourning into a mechanical process, that's not exactly the case here. OTT Releases of the Week: Radhika Apte’s OK Computer on Disney+ Hotstar, Sanya Malhotra’s Pagglait on Netflix, Manoj Bajpayee’s Silence – Can You Hear It on ZEE5 and More.

While Sandhya does come of age in those 13 days, it is also about her getting to know and understand her husband better only after his demise. While this track has promise, it is let down by pacing issues and the feeling of been-there-done-that. The fun frivolity of the way it started out slackens even as Sandhya becomes more confident. I loved that scene where the movie intercuts a sequence of Astik's father and brother doing soul-appeasing rituals at the ghats to that of Sandhya eating golgappes. The smart flourishes gets lesser as the movies reaches its finishing point. It isn't that the film is bereft of that - LOL-ed out when Tayaji blamed Padman when a young girl explains a situation using sanitary pads. Pagglait needed more such quirks, and less melodrama.

There is also the fact that for a film that is about progression, it makes some not very progressive decisions. Sandhya is seen talking about the picture of her husband's ex-paramour (Sayani Gupta) and says that she doesn't have a 'saaf rang'. Later, that other girl, when confronted by Sandhya that her dead husband was still in love with her after marrying someone else, tells her that he never cheated on his wife. Err... ever heard of emotional cheating? Also, why would Sandhya use a ruse to get out of a sticky situation in the climax, when all she could have said is 'No'? She wasn't exactly that pressurised to say 'Yes'! Which reminds me, the whole remarriage subplot that forms to crux of the third act is plain silly and feels rushed, no matter the circumstances in which it was interspersed in the plot.

Also, why was the best friend character not given much to do, save for her Muslim identity creating some bigoted awkwardness in the Hindu family? Or just having her gawp throughout over Sandhya's irreverent behaviour. Even the rest of family members - all played by such fine actors - just see them rise just a notch beyond the characters of soap dramas. The only character who manages to make a good impression is the dead man's father's character. Played in an effectively restrained manner by the awesome Ashutosh Rana, the character feels the most heartfelt of the lot, as he navigates through the sorrow of losing his son, while trying not think of the financial burden that is upon him. Wish the film was more about him.

Arijit Singh, who makes his debut as a composer, lends some decent enough tunes.

- The Performances, Especially Malhotra and Rana

- Has a Few Good Moments of Satire and Humour

- The Initial Promise of The Plot's X-Factor Isn't Fully Delivered

Pagglait comes across more of a mixed bag, where you want in to revel for its atypical premise but instead stay with it purely for the performances of the cast. Pagglait is streaming on Netflix.

(The above story first appeared on LatestLY on Mar 26, 2021 12:31 PM IST. For more news and updates on politics, world, sports, entertainment and lifestyle, log on to our website latestly.com).