Paresh Rawal Heads NSD: From Winning Padma Shri to Becoming BJP MP, Here Are Other Achievements of the Actor

On Thursday, veteran actor Paresh Rawal was appointed as the chairperson of National School of Drama (NSD). We are eager to see the kind of job Paresh will do. Right now, we are going to look back at some other notable achievements of the actor in his career. 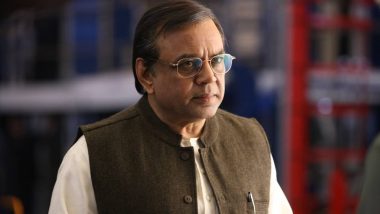 On Thursday, veteran actor Paresh Rawal was appointed as the chairperson of National School of Drama (NSD). The institute has given us many brilliant actors like Naseeruddin Shah, Om Puri, Anupam Kher, Irrfan Khan, Piyush Mishra, Neena Gupta to name just a few. With Paresh, an actor whose acting career spans over three and a half decades with hundreds of titles to his credit, it seems like the right person is at the helm of the institute. This is not the first time such an honour has been bestowed upon the actor. His life is bustling with achievements, which we will talk about in a jiffy. Riteish Deshmukh, Others Congratulate Paresh Rawal on Being Appointed NSD Chairman.

"It will be challenging but fun. I will do my best because this is a field I know very well. I have practical experience of 48 years of doing theatre world over. I have some ideas. I will see that NSD ‘ka zyada se zyada naam roshan ho’," Paresh told the media, after the news broke.

We are eager to see the kind of job Paresh will do. Right now, we are going to look back at some other notable achievements of the actor in his career. Exclusive: Bamfaad Actor Aditya Rawal Wants to Star in These Acclaimed Movies of His Father Paresh Rawal If They Got Remade.

In 2006, Paresh was given the Sardar Patel International Award for his amazing performance in the film, Sardar. The movie is an underrated gem, if you have not watched it yet, you should put it on your weekend plans.

It was the year 2014, when Paresh was bestowed with the fourth highest civilian award in India - Padma Shri. Then-president Pranab Mukherjee presented the award to the actor for his contributions to the entertainment industry.

With 2014 general election, the actor turned politician. He won as the Bharatiya Janata Party's Member of Parliament (MP) from Ahmedabad East constituency.

(The above story first appeared on LatestLY on Sep 11, 2020 12:06 AM IST. For more news and updates on politics, world, sports, entertainment and lifestyle, log on to our website latestly.com).