Producers Ronnie Screwvala and Siddharth Roy Kapur collectively have announced their next project Pippa which will star Ishaan Khatter, Mrunal Thakur and Priyanshu Painyuli in key roles. Check it out. 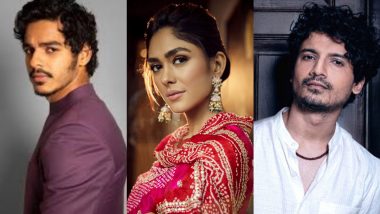 Producers Ronnie Screwvala and Siddharth Roy Kapur collectively have announced their next project Pippa which will star Ishaan Khatter, Mrunal Thakur and Priyanshu Painyuli in key roles. The movie is said to be a war film and will be inspired by the novel The Burning Chaffees penned by veteran Brigadier Balram Singh Mehta. Reportedly, the war drama will see Ishaan Khatter essaying the lead role of Balram Singh whereas the other two stars are supposed to play Khatter's siblings. The flick will eventually be based on the war in 1971 against Pakistan which led to the existence of Bangladesh. Pippa: Ishaan Khatter Roped in to Play the Lead in Raja Krishna Menon’s War Drama.

Pippa will be helmed by Raja Krishna Menon and comes from Bollywood producer Ronnie Screwvala who gave cinema a war blockbuster in the name of URI: The Surgical Strike. Well, after the official announcement of the cast, we are sure fans would be the most elated ones. Indeed, this looks a fantastic collaboration and we excited to see the glimpse from the same. A Suitable Boy Review: Tabu and Ishaan Khatter’s Mini-Series Is Not a ‘Suitable’ Adaptation for the Book Fans!

We're coming with all guns blazing.

Earlier, Ishaan in an interview with Mumbai Mirror had expressed his excitement to lead the battle of Garibpur. He had said, "I’m exhilarated to be a part of a film of such magnitude and importance and getting a chance to play the role of the suave and spirited tank commander, Brig Mehta is a true privilege. I’m honoured by the faith shown in me by Ronnie sir, Siddharth sir and Raja sir and I’m looking forward to the exciting experience of Pippa.” Stay tuned!

(The above story first appeared on LatestLY on Oct 29, 2020 01:12 PM IST. For more news and updates on politics, world, sports, entertainment and lifestyle, log on to our website latestly.com).