The families of Alia Bhatt and Ranbir Kapoor are gearing up for the wedding ceremony of the power couple slated for Thursday, April 14. 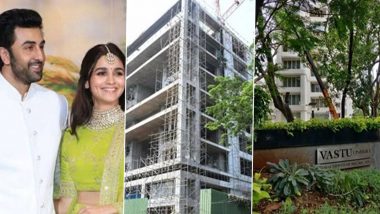 With Alia Bhatt's mehendi wrapping up on Wednesday, the focus has shifted to the marriage ceremony on Wednesday. The families of Alia Bhatt and Ranbir Kapoor are gearing up for the wedding ceremony of the power couple slated for Thursday, April 14. The baraat procession of members of the Kapoor family will move from Krishna Raj bungalow, the under-construction future home of Ranbir and Alia named after the late Raj Kapoor's wife, from one part of Mumbai's tony Pali Hill neighbourhood to Ranbir's current home, Vastu, in another part of the same area. Alia Bhatt-Ranbir Kapoor Wedding: Riddhima Kapoor Sahani, Neetu Kapoor Confirm Star Couple’s Wedding Date (Watch Video).

The two addresses are separated by less than a couple of kilometres. Ranbir had moved to Vastu from the ancestral home of the Kapoors in Chembur in 2016. Vastu's interiors, incidentally, had been designed by Gauri Khan. The stretch between the two venues has been dolled up with light decorations suspended from trees. Ranbir Kapoor-Alia Bhatt Wedding: Mahesh Bhatt, Pooja Bhatt Mark Their Presence at Duo’s Pre-Wedding Ceremonies.

On April 14, a contingent of policemen will be deployed to ensure the smooth movement of the baraat from one building to another.

(The above story first appeared on LatestLY on Apr 13, 2022 10:01 PM IST. For more news and updates on politics, world, sports, entertainment and lifestyle, log on to our website latestly.com).