Rohit Shetty celebrates his birthday today and we decided the best way to celebrate it with him will be to rank his blockbusters. The man has delivered a lot of hits and is one of the hitmachines of Bollywood. Now the wait is for Sooryavanshi to create the same craze as Simmba 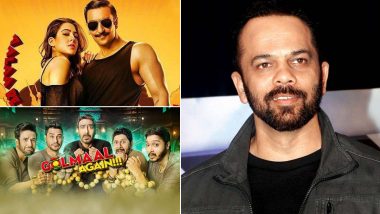 Rohit Shetty, the hit machine, celebrates his birthday today. There's so much to learn from this filmmaker. He loves to play to the gallery and does it so well that his most flawed film also manages to entertain even the naysayers. That's the magic of the man who grew up on the sets. Shetty belongs to that genre of filmmaking that believes in the fact that the prime job of a movie is to entertain. He manages to do that with extreme elan and the box office has been rewarding him for that. There's every Bollywood masala in his movies from slapstick comedy, romance, songs, light-hearted narrative, action and much more.  Ranveer Singh and Rohit Shetty Get Cars Flying and Burning in Their Latest Action-Packed Commercial (View Pic)

So on his birthday, we decided to rank five of Rohit Shetty's biggest blockbusters and some names might even surprise you.

If Hollywood has MCU, we have RCU, Rohit's Cop Universe. Post the success of the Singham series, Shetty came up with a franchise dedicated to the cops and Simmba became the biggest hit in the series. It is also Rohit Shetty's biggest blockbuster ever!

Shah Rukh Khan and Deepika Padukone together for a Shetty film that tapped the South Indian belt with his brand of cinema...that's a heady concoction which yielded profusely at the box office.

2017 was quite a dreadful year for Bollywood with Khan movies tanking and then came Golmaal Again on Diwali. It was a blast! The audience found the ghost comedy so hilarious that it became the biggest hit of that year.

A lot has been said about the Dilwale-Bajirao Mastani clash but nobody can deny that only a Rohit Shetty can guarantee god money despite a clash of such proportions. We will leave it at that!

Singham Returns went ahead and made the franchise extremely rich. Ajay Devgn's return as Bajirao Singham was loved by all but it couldn't match up to the genuineness of the original movie. Anyway, the box office was supremely kind to it.

While Rohit Shetty delivered many hits to make Bollywood cash-rich, our favourite film of the director will always be Zameen! Do watch it if you haven't on Rohit Shetty Day!

(The above story first appeared on LatestLY on Mar 14, 2021 08:10 AM IST. For more news and updates on politics, world, sports, entertainment and lifestyle, log on to our website latestly.com).