With the COVID cases witnessing an uptick and several restrictions put in place, it is safe to say that the film is doing a decent business until now. 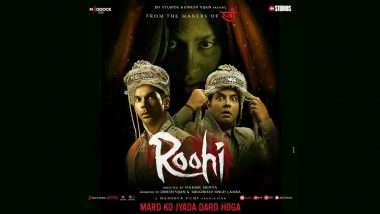 It has been five days since Rajkummar Rao, Janhvi Kapoor, Varun Sharma starrer Roohi made it to the theatres. The film was the first big banner movie to make it to the theatres post the lockdown and received mixed reviews from the audience. The movie might not have been able to make an impression on the critics but the audience is still coming to the theatres to watch the film. The box office collection of Roohi is gradually slowing down but is still holding a satisfactory hold for itself. On day 5 of its release, the film stands at a box office collection of Rs 1.35 crore. Roohi Box Office Collection Day 2: Janhvi Kapoor, Rajkummar Rao and Varun Sharma’s Movie Earns RS 2.25 Crore.

The film's business on the first day was a sum of Rs 3.06 crores. On the second day of its release, it witnessed a drop of 25 per cent and minted Rs 2.25 crores at the box office. On the third day, which marked the start of the weekend, Roohi witnessed an uprise of 1.17 crores from the second day. It garnered 3.42 crores on Day 3. On the fourth day, the film minted a total of Rs 3.85 crores. The total business for Roohi is now Rs 13.93 crores.

Helmed by Hardik Mehta, the movie is the first major Bollywood release post the COVID-19 lockdown. With the COVID cases witnessing an uptick and several restrictions put in place, it is safe to say that the film is doing a decent business until now. The Ministry of Information and Broadcasting has allowed cinema halls nationwide to operate at full capacity from February 1 with COVID-19 safety protocols put in place but with the rising Covid cases, the restriction may be implemented once again. Roohi Box Office Collection Day 4: Rajkummar Rao, Janhvi Kapoor’s Film Witnesses Slow Growth, Mints Rs 3.85 Cr.

A Jio Studios Presentation, Roohi is produced by Dinesh Vijan and Mrighdeep Singh Lamba. The film marks the first-ever collaboration of Rajkummar and Janhvi. Rajkummar and Varun have earlier shared screen space in the 2015 release Dolly Ki Doli. The film is based on the lines of the 2018 hit film Stree, which featured Shraddha Kapoor and Rajkummar Rao in lead roles.

(The above story first appeared on LatestLY on Mar 16, 2021 12:01 PM IST. For more news and updates on politics, world, sports, entertainment and lifestyle, log on to our website latestly.com).