Produced and directed by Ajay Devgn, Runway 34 revolves around Captain Vikrant Khanna whose flight takes a mysterious course after take-off from an international destination. Will the flying prodigy justfy his cockiness and his manevours in the trial that follows the unfortunate event. The Film also features Amitabh Bachchan,Rakul Preet Singh and Boman Irani in pivotal roles. 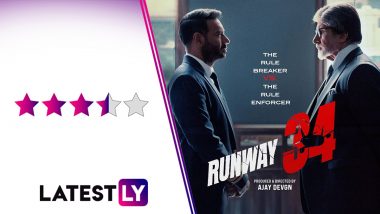 Runway 34 Movie Review: Ajay Devgn is on board, both metaphorically and quite literally, as he helms Runway 34 in his capacity as a producer and as a director, as indeed he plays the pilot who manages an impressive land (pun definitely intended!). You heave a sigh of relief for Devgn whose previous outings as a director have been absolute duds. But with Runway 34 the superstar impresses you with his acting chops as well as with his directorial acumen. At approximately 2 hours 30 mins, this runway doesn't seem stretched. Runway 34: Akshay Kumar Watches Ajay Devgn Directorial, Heaps Praises on Thriller Co-Starring Amitabh Bachchan, Rakul Preet Singh.

The film is distinctly divided into two narratives that have been spun with varying tonalities. While the first half revolves around the precarious and the questionable landing the protagonist decides to make, the second half has been crafted as a strict courtroom drama where the prosecution dissects the act of the landing without offering the thrills that the first half was replete with. One may therefore feel that one is experiencing two different genres, in a manner of speaking. Runway 34 is not a delicious treat that you would relish indulgently, but it's more of an experimental delicacy that must be appreciated for the variety it brings in.

The story revolves around Captain Vikrant (Ajay Devgn) and first officer Tanya (Rakul Preet Singh) who manage to crash-land to save the lives of their fellow passengers under unusual circumstances. The event follows a detailed investigation helmed and further probed into by senior advocate Vedant (Amitabh Bachchan). Will the pilots put up a strong case in their defense or will the unseen facets of the stories start to unspool in the trial.

One can't help but appreciate the smart screenplay, the sleek VFX, and the fine editing coupled with an exceptional background score that makes you immerse yourself in the tragic crash-landing episode. The tension and the drama in the 'air' is palpable. Unfortunately, the second half, dedicated to the probing of the unfortunate occurrence, highlights the proverbial jugalbandi between Ajay Devgn and Amitabh Bachchan. The tug of war between the two is intense and interesting to look at, but it doesn't satisfy you as a wholesome experience this film promises. The turmoil, the turbulence, and the tension is gripping but it doesn't exactly make you jump off the seat.Amitabh Bachchan Reciting ‘Agneepath’ for Father Harivansh Rai Bachchan in This Throwback Video Is Pure Gold! – WATCH.

What works in the favor of the film, apart from the linear and the dignified manner with which it has been crafted-without veering off to unnecessary romantic interludes and high-pitched dramas. The consistency in the texture of the film and the way it is mounted is hugely impressive. What works against this aviation drama though is the lack of tautness and crispness in the second half. The film glorifies the virtues of the protagonist with an impeccable record without exploring any vices, flaws or the dark shades of the cockiness he wears on the sleeves.

Amitabh Bachchan employs his towering personality and his rich baritone to fantastic effect once again. But we have seen Big B playing a close cousin of this character in the film Badla with more smarts. His act is supreme, but novelty on offer is largely questionable. Rakul Preet Singh impresses you with her co-pilot character. She infuses the helplessness, the eagerness, and the vulnerability of her character to give a memorable performance while the always-so-promising Boman Irani, although a delight to watch, has been reduced to the cliched and caricaturish business tycoon.

All in all, Ajay Devgn's Runway 34 takes off well to keep you hooked, but the second half lacks the bite... errr the turbulence, which makes it an enjoyable even if a one-time watch!  The impressive performances of the cast, the remarkable use of VFX and the sincerity it takes to experiment with new stories deserve extra points for sure!

(The above story first appeared on LatestLY on Apr 28, 2022 10:30 PM IST. For more news and updates on politics, world, sports, entertainment and lifestyle, log on to our website latestly.com).