The up-tempo dance single marks Nushrratt's music video debut and her fans get to see the actress in her hottest avatar yet. "Saiyaan Ji" is shot in an extravagant scale against the backdrop of a palatial setting. 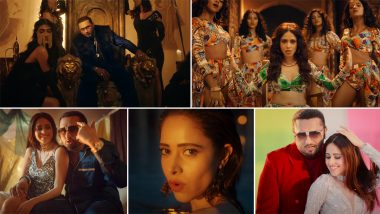 Yo Yo Honey Singh always manages to make his fans groove with his upbeat song. He has been teasing his fans about his next single with Neha Kakkar for a long time now. His fans have been waiting with bated breath to hear the peppy track and watch the glamorous Nushrratt Bharuccha groove to his beat. Well, the wait is finally over as the highly anticipated song "Saiyaan Ji" is out today! The song is visually appealing and the beats of the song will make you bust a move instantly as well. Yo Yo Honey Singh Trends on Twitter Thanks to His Impressive Body Transformation, Fans Shower Praises.

The up-tempo dance single marks Nushrratt's music video debut and her fans get to see the actress in her hottest avatar yet. "Saiyaan Ji" is shot in an extravagant scale against the backdrop of a palatial setting. Yo Yo Honey Singh and Nushrratt Bharuccha sport different looks in the song that are edgy, bold and very stylish.

The party track is penned by Yo Yo Honey Singh, Lil Golu and Hommie Dilliwala and is also heavy on choreography and dance. Nushrratt is seen performing some exquisite belly dance moves in the song guaranteed to have you on your feet. The peppy track "Saiyaan Ji" has been directed by Mihir Gulati, who has been a part of many of  Yo Yo Honey Singh’s biggest music videos.

Talking about the song says Yo Yo Honey Singh, “I’m really excited about "Saiyaan Ji" which is finally out for my fans. Nushrratt is spectacular in this song and like a true artist, she put in a lot of hard work and rehearsed nights. "Saiyaan Ji" is the kind of track you just want to get up and dance to.” Nushrratt Bharuccha Reveals How She Manages to Sleep After Watching Horror Films.

Nushrratt Bharuccha added, “Destiny has always played a big role when it comes to honey sir and myself. I have been a huge fan of his work for a very long time. For this song, he sent me a simple message saying he has this catchy track and that I would fit in perfectly and that he wanted me to be in it. It was a 36-hour long shoot and we had a blast! Every line that was being rapped or shot, one could feel the infectious energy and it was just amazing !”

Apart from this, Nushrratt was last seen in Chhalaang opposite Rajkummar Rao. The film had ditched a theatrical release due to the pandemic and was released on Amazon Prime Video.  Next, she will be seen in the horror film Chorrii.  She also has Hurdang opposite Sunny Kaushal and Vijay Varma. Nushrratt is also a part of Omung Kumar's Janhit Mein Jaari.

(The above story first appeared on LatestLY on Jan 27, 2021 07:20 PM IST. For more news and updates on politics, world, sports, entertainment and lifestyle, log on to our website latestly.com).