When we talk about the songs featuring Salman Khan, something that tops the list is the romantic numbers. He has appeared in some of the most romantic or emotional numbers that one could never take off their playlist. 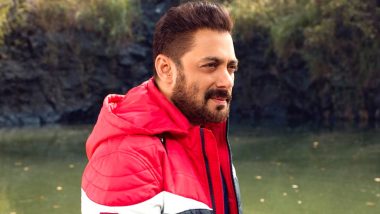 Salman Khan is the single, handsome and one of the most talented stars of Bollywood. He is not only praised for his efforts onscreen, but for all the charitable works he does off screen, this charming man of B-town has won hearts. This actor, producer, singer and television personality would be turning 55 tomorrow. And fans across the country and in many other regions of the world would be celebrating this special day by not only slicing birthday cakes on his behalf, but also by playing some of his chartbuster songs. Salman Khan's 55th Birthday Gift For Fans To Be Radhe: Your Most Wanted Bhai's Release Announcement?

When we talk about the songs featuring Salman Khan, something that tops the list is the romantic numbers. He has appeared in some of the most romantic or emotional numbers that one could never take off their playlist. There are also popular party numbers and also dhinchak tracks as well. On the occasion of his birthday, let’s take a look at some of his most popular songs of from the last decade that are a hit even today!

“O Priya O Priya” from Kahin Pyaar Na Ho Jaaye was crooned by Kamaal Khan, Alka Yagnik, Kumar Sanu and Nitin Mukesh. This song stayed on as one of the most favourite of every young couple.

“Lagan Lagi” from Tere Naam sung by Sukhwinder Singh is a fast paced number featuring Salman Khan, composed by Sajid-Wajid. The songs from this film were a huge hit.

“Jeene Ke Ishaare” is a melodious track from Phir Milenge sung Shankar Mahadevan starring Salman Khan and Shilpa Shetty. This classic number has been composed by Shankar-Ehsaan-Loy and the beautiful lyrics have been penned by Prasoon Joshi.

“Munni Badnaam Hui” from is a fun number from Dabangg starring Malaika Arora (in special appearance) and Salman Khan. Sung by Mamta Sharma, Aishwarya Nigam and Master Saleem this song is a hit even now.

These are some of the chartbusters starring Salman Khan. Here’s wishing the handsome hunk a very happy birthday in advance!

(The above story first appeared on LatestLY on Dec 26, 2020 07:51 PM IST. For more news and updates on politics, world, sports, entertainment and lifestyle, log on to our website latestly.com).