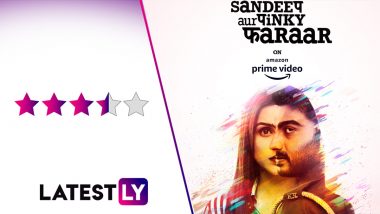 Apart from this producer-credit hassles that no party is willing to talk about, Sandeep Aur Pinky Faraar has seen quite a few other problems. From  its delayed release before it was dumped to die in theatres, Sandeep Aur Pinky Faraar is also suffering from low IMDb score of 4.0 (at the time of writing this review), mostly because the new-born SSR fans are dragging the rating down for nepotism.

The reason I have started my review with this background is because Sandeep Aur Pinky Faraar, its director and its actors do not deserve the kind of negativity directed towards their effort. In fact, if YRF had stayed as its producer, then this would have been one of the better films that the Bollywood's prestigious banner had made in the past decade. If not the best.

Sandeep Aur Pinky Faraar is a dark thriller-drama about two unlikely people coming together for an escape to survival. Sandeep Kaur aka Sandy Walia (Parineeti Chopra) is a high-flyer, working in investment banking and earning in lakhs, when not having an affair with her boss. Satyajit Dahiya aka Pinky (Arjun Kapoor) is a suspended cop trying to get back into service by doing one task for his senior Tyagi (Jaideep Ahlawat).

That same task brings Sandeep and Pinky together, first as the hunt and the bait, and then as reluctant accomplices on the run from the law that could get them killed.

Sandeep Aur Pinky Faraar is quite a deceptive-looking title, isn't it? For one it is quite subversive in gender nomenclature. Here, Sandeep is a girl, while Pinky is the guy's pet-name. The gender subversion also extends to their characters, where Sandeep is depicted to be a career-driven shrewd investment banker who doesn't know cooking much, while Pinky at one point is shown making chapattis, and later seen in a female attire (but not for comedic purposes). Sandeep Aur Pinky Faraar: Dibakar Banerjee Is Happy To Release His Film in the Middle of COVID-19 Pandemic.

Another interesting aspect about the title is that it sounds like a fun romcom, like Jab We Met that one of the characters refers to in the film. The very same character turns out to be a sleazy fellow, so likewise even the title is fooling you with the genre. The fun fact here is that the 'Faraar' word comes from one singular scene where the film allows its characters to let their hair down for an impromptu dance performance to what is supposed to be a Salman Khan song. Otherwise, Sandeep Aur Pinky Faraar is a dark film featuring a pregnant woman, her undependable runaway partner, a killer cop on the chase, and pervy and sexist men around the corner. There is no romance that Dibakar wants to establish, thankfully, just two individuals who form an unlikely but brittle bond on a trust that can cease to exist anytime.

In between, there are subtle digs at sexism, bigotry, social divide and perversions prevalent in the society. In a scene, Pinky asks Sandy why couldn't privileged people like her escape through other means, while people like him don't have any option. A couple of scenes later, she questions Pinky back as to why nothing makes people like him happy. He gets angry, thinking she was insulting his lack of privilege. But she points out to his gender, without saying so directly, taking examples that show the privilege male misogyny has seeks no strata in society.

We meet an older couple (Neena Gupta and Raghubir Yadav) who gives Sandy and Pinky accommodation while they are hiding in Pithoragarh. In any other film, the senior couple would have been a catalyst, a benchmark for the younger couple to see how love becomes stronger with age. However, here, Sandy only sees the narrow mindedness of the husband, the taunts he keeps throwing at his wife, while showing that he cares for her health, and yet letting her make food while he complains about that. In the first scene they meet the main leads, the husband berates the wife for even thinking of making Sandy and Pinky as their paying guests, only to change his mind a minute later, after the offer of money is made, surprising his wife.

Or later, during a dining table conference, watch the man's annoyed expression when Sandy shuts down her 'husband', or when he thanks Pinky later for when Sandy had solved a financial problem of his. Sandy isn't just escaping from the law, she is also trying to survive in a man's world, where later, she has a terrible experience with a man who she thought she had under her control. The ideologies of the flawed men may not matter here, but I couldn't help but chuckle when Raghubir Yadav's character tells Tyagi to do a surgical strike on a wedding procession.

However, while Sandeep Aur Pinky Faraar is definitely a dark movie, it isn't a hopeless one. In the end it is all about getting goodness and solidarity from unexpected corners, that feel like pockets of sun rays bursting through storm-clouds.

Sandeep Aur Pinky Faraar may not be one of Dibakar's stronger efforts - the film has pacing issues and the climax, while not bad, does offer an easy way out for the leads. Yet, it is a film that deserves your attention for daring to attempt different and staying that way, while not starving of the director's trademark flourishes. One of my fave scenes is the opening sequence, where the focus is on a trio of rowdy men drive on a highway making sleazy jokes. One of the cars they rashly pass over has our leads, though it is only later that we see the same scene from their perspective. How the scene ends, not only sets the tone of the film, but also the themes as well.

Dibakar is also a director who brings out the best from his actors, even if they are not known exactly for award-winning histrionics. Remember Emraan Hashmi in Shanghai, or Sanjay Kapoor in Lust Stories? The director extracts similar performances from his two lead actors here, who have often been criticised recently (including by yours truly) for their less-than-impressive performances. Arjun Kapoor is fine as the Haryanvi ex-cop who finds in himself a heart of gold, his dance performance will bring a smile to your face.

But the movie truly belongs to Parineeti Chopra, who has delivered her best performance in what has been ages after a promising start with Ladies vs Ricky Bahl. She is in total command of her performance, never going over the top in her act - even in the scene, where she bawls her heart out after coming to a very tragic realisation. Or just watch her expressions while her Sandy observes the men around her. This is a performance worth applauding!

In the supporting cast, Raghubir Yadav and Neena Gupta show their sold mettle as the elderly couple of Pithoragarh. Jaideep Ahlawat is dependable as always as Tyagi. Rahul Kumar, Dev Chauhan, Archana Patel, Sukant Goel are all good in their respective roles.

- A Subversive Thriller That Discomforts You

Sandeep Aur Pinky Faraar is not only a thriller that deserves your attention, but also houses a fine Parineeti Chopra performance that we have been looking out for years. The movie is streaming on Amazon Prime Video.

(The above story first appeared on LatestLY on May 20, 2021 03:40 PM IST. For more news and updates on politics, world, sports, entertainment and lifestyle, log on to our website latestly.com).