It has been a long, long time since fans were waiting for the official announcement on the release dates of Pathaan, Jayeshbhai Jordaar and Tiger 3 and Yash Raj Films finally shared the updates with intriguing teasers. 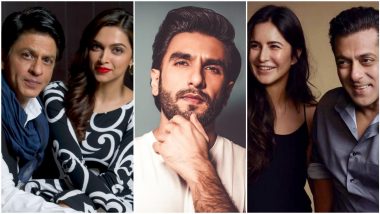 The cinephiles have been unable to contain their excitement ever since Yash Raj Films aka YRF shared release dates of some of the major films featuring the superstars of Bollywood. It has been a long, long time since fans were waiting for the official announcement on the release dates of Pathaan, Jayeshbhai Jordaar and Tiger 3. These announcements were indeed one of the best treats for the movie buffs. Along with the release dates, the makers even shared a glimpse of the superstars through the announcement teaser videos. Salman Khan Confirms Cameo Crossovers With Shah Rukh Khan in Tiger 3, Pathaan.

Pathaan marks Shah Rukh Khan’s return to the movies after four years. Billed as a high-octane spy thriller, the Siddharth Anand directorial also stars Deepika Padukone and John Abraham. The release date announcement video teases a glimpse of King Khan, who’d be seen playing the titular role. The film is all set to be released on January 25, 2023. Pathaan: Fans Thrilled To Watch Shah Rukh Khan On The Big Screen, Trend ‘King Is Back’ On Twitter.

Jayeshbhai Jordaar starring Ranveer Singh promises to be a roller-coaster ride of emotions. The actor, who’d be seen as a superhero of a very unconventional type, shared a fun video on social media to announce about the film’s release date that also stars Shalini Pandey as the female lead. The film will hit the big screens on May 13. Jayeshbhai Jordaar: Ranveer Singh’s Film To Arrive In Theatres On May 13 (Watch Video).

Tiger 3 is an espionage action thriller with audiences’ favourite onscreen pair in the lead, Salman Khan and Katrina Kaif. The handsome hunk’s dialogue in the teaser ‘Tiger is always ready’ has impressed netizens already and one just can’t wait to know what more is in store for them. It’s an Eid special release, set to arrive in theatres on April 21, 2023. Tiger 3 To Release On April 21, 2023! Netizens Say Salman Khan, Katrina Kaif’s Film Will Be A Blockbuster (Watch Video).

Which YRF Date Announcement Teaser Impressed You The Most?

Pathaan, Jayeshbhai Jordaar and Tiger 3 are the biggest releases that would be produced under Yash Raj Films’ banner. Do let us know which YRF date announcement teaser impressed you the most by casting your vote!

(The above story first appeared on LatestLY on Mar 04, 2022 06:28 PM IST. For more news and updates on politics, world, sports, entertainment and lifestyle, log on to our website latestly.com).