On the 'acting' front, his cameo in Ayan Mukerji's fantasy trilogy, Brahmastra is the only confirmed appearance. 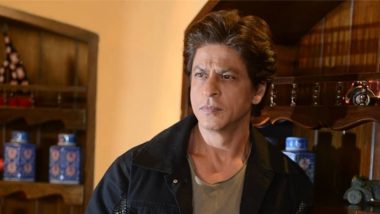 Shah Rukh Khan is in no mood to announce his next film in which he will star. However, as a producer, the superstar is going at a rapid speed. Recently, he bankrolled Sanjay Mishra's Kaamyaab which was well-received by the critics, just as his previous outing Amitabh Bachchan-Taapsee Pannu's Badla. He also tried his luck with Netflix series Bard of Blood. Now, next in his list is a film on Muzaffarpur shelter mass abuse case of 2018, if we go by the reports. Kaamyaab Movie Review: Sanjay Mishra’s Sincere Performance Uplifts This Often Gratifying Ode to Character Artistes of Bollywood.

As per the report published by Mumbai Mirror, this flick will be directed by Pulkit. (maker of Maroon, Subhash Chandra Bose show). A source informed the publication, "He has done extensive research for the film, which will have a journalist as the protagonist and is expected to roll in July. The cast will be finalised shortly."

SRK has mostly refrained from starring in the films produced by his own, Red Chillies Entertainment. Owing to this, one might not really hope to see him in the role of the journalist or any other key role. However, he is known to give a platform to untapped talent, so a versatile cast can be expected for sure.

On the 'acting' front, his cameo in Ayan Mukerji's fantasy trilogy, Brahmastra is the only confirmed appearance. He has a crisp and crucial role in this Ranbir Kapoor-Alia Bhatt-Amitabh Bachchan starrer film. Speculations say that he is in talks with Raj & DK and Atlee for his next. However, the announcement (which was expected to be on his birthday last year) is no where to be seen as of now. Stay tuned for more updates.

(The above story first appeared on LatestLY on Mar 17, 2020 08:38 AM IST. For more news and updates on politics, world, sports, entertainment and lifestyle, log on to our website latestly.com).