Shahid Kapoor and Arjun Kapoor have been approached to star in Abhishek Kapoor's Sharabi, being produced by Bhushan Kumar. 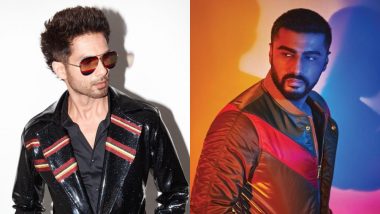 Here is an interesting piece of gossip that will make your time browsing on the internet worthwhile. Arjun Kapoor and Shahid Kapoor are in the running to star in Abhishek Kapoor's next film, Sharaabi. And only one of them will bag the role. Whoa! It is one of those times when the internet gets divided in two. Some will be Team Shahid and some will be Team Arjun. Which team are you on? As per a report by Bollywood Hungama, after Kedarnath, Abhishek is making a comedy titled Sharaabi, which tells the story of a dysfunctional alcoholic. Some reports suggest that this one is a remake of the Amitabh Bachchan starrer Sharaabi, but chances of this being true are slim. BMW G 310 R Motorcycle is Shahid Kapoor’s Perfect Hack to Mumbai Traffic: View Pics.

A source close to the production confirmed the news to the entertainment portal by saying, “Yes, Arjun and Shahid have been approached for the role of the protagonist. Both actors have expressed interest in it but neither has come on board yet for the film. The film is in the very initial stages and the makers are keen to have one of them in this role. The official announcement will be made once the modalities are completed.” Koffee With Karan 6: Malaika Arora Finally Confesses on National Television That She LIKES Arjun Kapoor! (Watch Video).

We are eagerly looking forward to this collaboration. Here is some extra spice for the story. Sharabi will be co-produced by Bhushan Kumar making this his first collab with Abhishek. “Sharaabi will be the right concoction of comedy, drama, and music, " Abhishek told the portal.

What is more interesting is that if Shahid is locked in for the role, this will be his second film right after Kabir Singh in which he plays an alcoholic. Kabir Singh is the Hindi remake of the Tamil film, Arjun Reddy.

On the work front, Arjun will be next seen in Sandeep aur Pinky Faraar which also stars Parineeti Chopra. The actor has also been shooting for India's Most Wanted and Panipat.

(The above story first appeared on LatestLY on Mar 04, 2019 12:31 AM IST. For more news and updates on politics, world, sports, entertainment and lifestyle, log on to our website latestly.com).