Shakuntala Devi: The Human Computer - Vidya Balan Announces the Release Date of Her Film on Amazon Prime With a Math Problem (Watch Video) 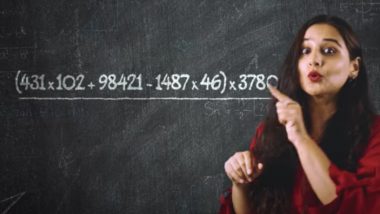 Can you solve this:

Shakuntala Devi is co-produced by Sony Pictures Networks India and Vikram Malhotra. The Anu Menon directorial is among several other releases which are up for direct digital release.

(The above story first appeared on LatestLY on Jul 02, 2020 08:05 PM IST. For more news and updates on politics, world, sports, entertainment and lifestyle, log on to our website latestly.com).