Rhea Chakraborty's brother Showik Chakraborty who was arrested a few months ago by Narcotics Control Bureau with regards to the drugs case related to late actor Sushant Singh Rajput's death has been given bail by a special court. Check out the full story. 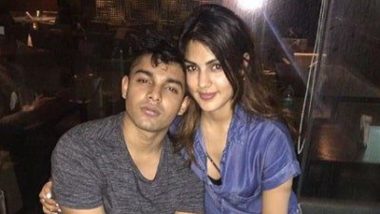 Bollywood actress Rhea Chakraborty's brother Showik Chakraborty who was arrested a few months ago by Narcotics Control Bureau with regards to the drugs case related to late actor Sushant Singh Rajput's death has been given bail. As per the latest report in ANI, the special NDPS court has granted bail to Showik. Finally, after months into custody, Showik will be out from the jail. Earlier, the same court had rejected Showik’s bail application. SSR Case: Rhea Chakraborty’s Brother Showik Moves Fresh Bail Application In Special NDPS Court.

It was on November 3, when Showik had filed a fresh bail in the special court claiming that he was no culprit and has been dragged in the case as no drugs or psychotropic substances were found at his possession. This means that exactly after a month the court passed the decision. Rhea Chakraborty Granted Bail by Bombay High Court, Brother Showik Chakraborty to Remain in Custody.

“In the facts and circumstances of the present case, given that no commercial quantity has been alleged in respect of the applicant, there has been no recovery from the applicant and that all allegations pertain only to small quantities, the embargo imposed by Section 37 of the NDPS Act, 1985 would not be applicable,” the bail application by Showik read.

It was in September when Showik was arrested by the Narcotics Control Bureau (NCB) who are investigating the drug case linked to Sushant Singh Rajput death, who was died by suicide at his Bandra residence on June 14. Stay tuned!

(The above story first appeared on LatestLY on Dec 02, 2020 03:37 PM IST. For more news and updates on politics, world, sports, entertainment and lifestyle, log on to our website latestly.com).