Shraddha Kapoor To Play Sridevi's Role In Chaalbaaz In London; Did You Know The Late Actress Wanted Alia Bhatt In The Remake?

Chaalbaaz In London has been announced with Shraddha Kapoor playing the lead. She will step into late Sridevi's dual roles. But did you know Sridevi herself wanted Alia Bhatt to be part of the remake? Rumour has it that David Dhawan had Alia in mind for the remake as well which the actress even confirmed. 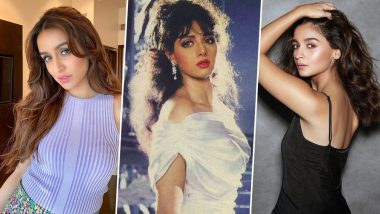 After years of speculation, Chaalbaaz remake has finally been announced with Shraddha Kapoor in the lead. She will play her first dual role in the reboot. The title also got altered to Chaalbaaz In London. The film will be directed by Pankaj Parashar, the man who directed Sridevi in the original movie. But do you know the late actress had someone in mind when it came to Chaalbaaz's remake? Sridevi wanted Alia Bhatt to play her role if ever the movie gets a remake.  Chaalbaaz In London: Shraddha Kapoor To Step Into Late Sridevi’s Role In The Reboot Of The Classic (Watch Video)

Speaking to DNA back in 2017, Sridevi had said, "I think Chalbaaz will make for a great remake now. Alia would fit the role perfectly. She is spontaneous and an extremely natural actor. She can look vulnerable, innocent and at the same time, she can be smart and mischievous too." In fact, Alia was almost finalised for the same as well.

Apparently, David Dhawan was gearing up for the remake of Chaalbaaz and wanted Alia to play the lead. The young actress had even mentioned something about to media saying, When I asked David sir to cast me in his next flick, Judwaa 3, he told me ‘I have a better role for you in mind’. When I asked him again after a little while, he smiled and said, ‘You do not have to work in Judwaa 3 with me, but you will be working in the remake of Chaalbaaz with me’.” Shraddha Kapoor Attends Rumoured Boyfriend Rohan Shrestha’s Birthday Bash, Turn Heads in a Shimmery Mini Dress!

Well, we never support a remake. But Chaalbaaz isn't a novel idea anyway because a lot of movies on the same trope has been made like Ram Aur Shyam, Seeta Aur Geeta and Kishan Kanhaiyya. Shraddha's Chaalbaaz In London will just be yet another addition to that list.

(The above story first appeared on LatestLY on Apr 03, 2021 06:47 PM IST. For more news and updates on politics, world, sports, entertainment and lifestyle, log on to our website latestly.com).