The actor often posts pictures of himself with witty and hilarious captions, so this time around as well, he made sure he puts a smile on his fans' faces as he gives an update on his health. 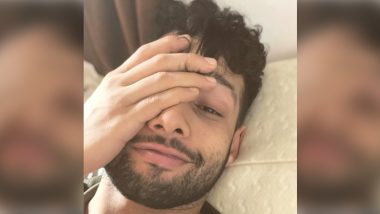 A new wave of the novel coronavirus can be seen coming in many states of the country and a pool of new victims have been emerging everywhere. Bollywood too has come under the wrath of this wave as many stars got infected in just a couple of months of 2021. Ranbir Kapoor, Sanjay Leela Bhansali, Tara Sutaria, Siddhant Chaturvedi, Manoj Bajypayee are a few celebs who were infected by the virus recently. Chaturvedi, who is very active on social media, is even making sure his fans are updated about his health. Siddhant Chaturvedi Fans Melt over Cute Throwback Photo of Gully Boy Star That Also Features Jacqueline Fernandez-Sushant Singh Rajput.

The actor often posts pictures of himself with witty and hilarious captions, so this time around as well, he made sure he puts a smile on his fans' faces. Giving an update on his health, the actor said that he is currently in recovery mode. He shared an adorable selfie where we see his face up close to the camera as he covers one of his eyes with his hand and smirks for the photo. Captioning the post, Siddhant wrote, "Abhi Vaccine aane ki khushi hui hi thi ki... Corona bola Thappa!" The actor looks healthy and we wish him speedy recovery.

Earlier, the actor had informed his fans on his Instagram story, regarding contracting the virus. He had written, "Thank you all for all your concern. Confirming that I have tested positive for Covid 19. I'm feeling fine at this time and self quarantining at home. I have taken all precautions and followed all protocols as adviced by the doctors. Being positive and tackling this head on." Confirmed! Siddhant Chaturvedi Teams up with Katrina Kaif for a Horror Comedy - Read Details.

On the work front, Siddhant will be next seen in Yudhra. The actor will also be seen essaying the lead alongside Deepika Padukone and Ananya Panday in Shakun Batra's next untitled venture. Siddhant will also feature alongside Katrina Kaif and Ishaan Khatter in Phone Bhoot.

(The above story first appeared on LatestLY on Mar 17, 2021 11:05 AM IST. For more news and updates on politics, world, sports, entertainment and lifestyle, log on to our website latestly.com).