Sonu Sood gets engraved on sand; a fan's tribute to his efforts for the migrant workers amid this COVID-19 crisis. Check it out. 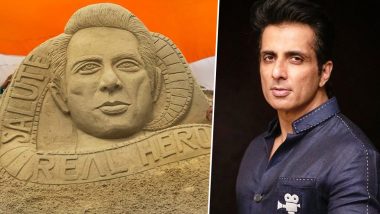 The ongoing coronavirus pandemic in India has led to many migrant workers stuck in various parts of the country as there is no scope for them to reach their hometown amid the lockdown. But then, there are messiah-like Bollywood actor, Sonu Sood who has been helping these migrant workers reach their ghar safely. The Dabangg star's generous deed has made him famous where he has been lauded by fans as well his contemporaries. For the unware, Sood has extended support to these needy's by facilitating them with means of transport. Well, after becoming part of many artworks, Sonu now gets engraved on sand. Sonu Sood's Charitable Superheroics to Help Migrant Workers Make For An Apt Cartoon (View Pic).

As a fan recently shared an image of his sand artwork and in a nutshell, it honours the great work the actor has been doing amid the COVID-19 crisis. In the photo, we can see Sood's sand sculpture which reads, 'Salute Real Hero'. The person who has shared the pic happens to be Chintan Desai. Also, it was recently, when renowned cartoonist, Satish Acharya also sketched the Bollywood actor which saw an image of Sonu carrying migrants on his back. Sanjay Gupta and Sonu Sood Have an Inside Joke Over Akshay Kumar Starring In Latter's Biopic!

Earlier, even celebrity chef, Vikas Khanna named a dish inspired from Sonu Sood's hometown, Moga. Indeed, the actor is going the right route. However, he has not only turned a superhero for migrant workers in this crisis. As Sood has also donated 1500 PPE kits across the state of Punjab and made his Mumbai motel available for healthcare workers. Bravo. Stay tuned!

(The above story first appeared on LatestLY on May 28, 2020 05:35 PM IST. For more news and updates on politics, world, sports, entertainment and lifestyle, log on to our website latestly.com).