Stree is being compared with Ajay Devgn's Golmaal Again, which is quite unfair for the film. There are more than a couple of reasons for that. 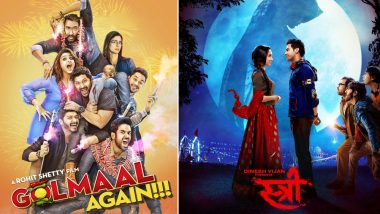 Rajkummar Rao and Shraddha Kapoor's Stree is doing some really good business at the box office. Totally decimating its Friday competitor, Yamla Pagla Deewana Phir Se, the movie dominated the weekend with the public thronging the theatres to enjoy the laughs and the scares. As per the latest box office update, Stree has collected Rs 48 crore, and will surpass the Rs 50 crore mark today with ease. It also has the potential to become Rajkummar's Rao's highest grossing film as a lead, once it surpassed Kai Po Che's Rs 49.67 crore earnings today.

The trade experts are quite happy with the film's progress and how the audience has embraced the horror comedy as a genre. However, in the process, Stree is being compared with Ajay Devgn's Golmaal Again, which is quite unfair for the film. There are more than a couple of reasons for that.

First of all, Golmaal Again benefits from the box office power of an established star like Ajay Devgn. Rajkummar Rao has recently found mainstream success, while Shraddha's recent films before Stree have been struggling at the box office. Secondly, Golmaal Again has been a part of a successful franchise, which Stree isn't. Last but more importantly both belong to different genres, despite revolving around ghosts and gags.

In order to understand the difference, let's talk about the genres of each movie.

Golmaal Again belongs to the genre of supernatural comedy. In the films of this genre, the supernatural elements are present, but they are not there with the intention to scare or terrify you at all, rather use them to make you laugh. Some of the examples of this genre in Hollywood are Casper: The Friendly Ghost, Beetlejuice, Addams Family Values etc. In Bollywood, we had films like Gang of Ghosts, Great Grand Masti etc.

Now Stree belongs to the genre, horror comedy. Movies in this genre while trying to make you laugh, are also not averse to scaring the shite out of you. People who have watched Stree will agree with us on this. Some of the fine examples in Hollywood for this genre are Zombieland, Shaun of the Daud, Cabin in the Woods, Pride and Prejudice and Zombies etc. In Bollywood, even though, technically, there are no ghosts in the film, Bhool Bhulaiya is a fine example. Also, Go Goa Gone, that was directed by Raj & DK (who wrote and produced Stree) is also a cult example of this genre. This is a more tricky genre to make since there has to be a balance in making you laugh while also putting the onus on frights.

So next time when you put Golmaal Again and Stree in the same category, do remember that you are doing justice to neither.

(The above story first appeared on LatestLY on Sep 05, 2018 05:29 PM IST. For more news and updates on politics, world, sports, entertainment and lifestyle, log on to our website latestly.com).