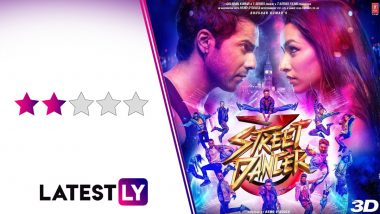 Street Dancer 3D Movie Review: So ABCD 3, I mean, Street Dancer 3D is set in London, where Indian and Pakistani dance troupes are often at loggerheads with each other. The Indian troupe who calls themselves Street Dancers, is led by Sahej (Varun Dhawan), while the Pakistani group, The Rule Breakers (ahem...ahem...) is led by Inayat (Shraddha Kapoor). From the streets to over Indo-Pak cricket matches, they find asinine reasons to clash with each other. But a huge dance contest Ground Zero could turn out to be a common ground for them to bond together. That, in a nutshell, is the premise of Remo D'Souza's Street Dancer 3D. Street Dancer 3D: Nora Fatehi’s Hairdo for Varun Dhawan, Shraddha Kapoor Starrer Costs Rs 2.5 Lakh.

Sahej has his Jo Jeeta Wohi Sikandar track going on with a pretty Nora (Nora Fatehi) doing her Pooja Bedi bit and an elder brother (Punit Pathak), who gets injured in the last Ground Zero competition. The Pakistani Inayat, in order to win the Indian viewers' hearts, grows a conscience and decides to help illegal immigrants return to their countries with the help of a samaritan-cum-restauranteur Anna (Prabhu Deva). And it is Anna who suggests Sahej and Inayat come together so that they can win Ground Zero.

Actually forget the predictable premise and the social causes it wants to promote, they are just an excuse to thread the many dance moments in the film, in case we don't accuse Remo of making a very elaborate big-screen Dance India Dance saga.

Remind me why they couldn't name it ABCD 3? They even have a "Bezubaan" track in the film, a staple in the ABCD movies, and one character even gets to utter "We dance to express, you dance to impress" shtick, another ABCD trope. Also, all three films end with a grand competition finale. For a film that is named Street Dancer, there are actually only a couple times, they actually dance on the streets.

Remo D'Souza, who comes off the disaster they called Race 3, returns to the arena where he is confident the most. And if you are one who gets fawned by the elaborately-choreographed dances, then you could be in for a treat. But Remo's story-telling abilities continue to lack the polish that his choreographing skills have. Shraddha Kapoor Looks Like a Velveteen Dream in Burgundy Dress for Street Dancer 3D Promotions!

The trite plotting delves into harping on your sentiments, that it feels like Remo has been inspired by the emotional segments in the reality shows that show contestants' backstories. And if that doesn't work, there is always the implementation of patriotic fervour. Like Sahej himself says in the film, why do Indians love to put sentiments in everything? Yes, Remo, why? Street Dancer 3D's recursion into tropes is also annoying. Sahej goes through losing-his-purpose (and friends) track before getting his awakening is such an oft-abused theme. Inayat's family has to be shown a conservative one, whose close-minded attitude gets changed with one monologue.

There was potential to make Street Dancer 3D into something different this time. The idea of Indians and Pakistanis coming together to beat their former conquerors could have more appeal than what happens in the film.

There is a moment in the film, where Sahej, realising his follies, literally shatters his illusions and does a bare-bodied dance to get him back in touch with his passion. But the cloy manner in how the scene is treated and that the moment is later hijacked by his brother, so that Punit gets to show some moves, loses the little impact the scene had. As Street Dancer 3D is penned by Tushar Hiranandani, who directed last year's delightful Saand Ki Aankh, this comes off as a disappointment.

Anyway, you are in Street Dancer 3D for the dances and there are PLENTY of those. So much that they begin to make you lose interest after some back-to-back sequences. Thankfully, Remo reserves the best for the third act. The sequence that marks the return of Sahej to his roots, and the finale sequence are impressively mounted with some very fantastic choreography (Kruti Mahesh, Rahul Shetty (RnP) and Tashan Muir, take a bow!). I also rooted for the scene having Prabhu Deva reprise his "Muqabla" act, but that's just the nostalgia lover in me. Just don't go on questioning the logic of how certain things pan out, though, like how the troupe manages to overcome a technical glitch to come out with an impromptu synchronised performance. Or how the opponents are winded up in brief acts, while the heroes get to stage longer dance acts. It's Bollywood, after all!

Street Dancer 3D also looks impressive visually with its production values, and some glossy camerawork (Vijay Kumar Arora). The 3D aspect is merely the people in the film throwing glitter, water drops and at one point, sweat beads off Nora Fatehi's belly, in our direction.

The songs are mostly remixes and work well with the dance sequences, with Badshah's "Garmi" being the most captivating track. The editing leaves a lot to be desired. Farhad Samji-Jagdeep Sidhu's dialogues are, surprisingly, listless and occasionally, unintentionally hilarious. In one scene, the usually sage Anna has his Modi moment of jumbling up science stuff and claim that in physics, two negatives make for a positive. For a film that is pretty 'formula' ridden, at least get the fact right that it is 'Maths' and not 'Physics'!

Varun Dhawan and Shraddha Kapoor do good with their rather bland characters, and they also get to impress with their dance moves. Like with ABCD 2, there are occasions where we feel that they are the weakest dancers among the bunch. Considering, though, they are essentially surrounded by non-actors, we are glad that they are around to carry the weak narrative with their fantastic screen-presence and decent acting abilities. Nora Fatehi oozes oomph and is an incredible dancer almost stealing the limelight from the two leads quite a few times.

Prabhu Deva is a dream to watch when he dances, and Street Dancer 3D, mercifully, has more such moments. The DID gang scores when they have to shake their everything, but still has miles to cover when it comes to histrionics. Aparshakti Khurana, in a more emotional role than we have seen him before, is restricted to making a sad puppy face.

Street Dancer 3D is purely for those who love to see some splendid dance moves on the big screen, when the small-screen appeal of Dance India Dance and Super Dancer isn't enough. Or if you are the die-hard fans of its good-looking lead stars.

(The above story first appeared on LatestLY on Jan 23, 2020 08:41 PM IST. For more news and updates on politics, world, sports, entertainment and lifestyle, log on to our website latestly.com).