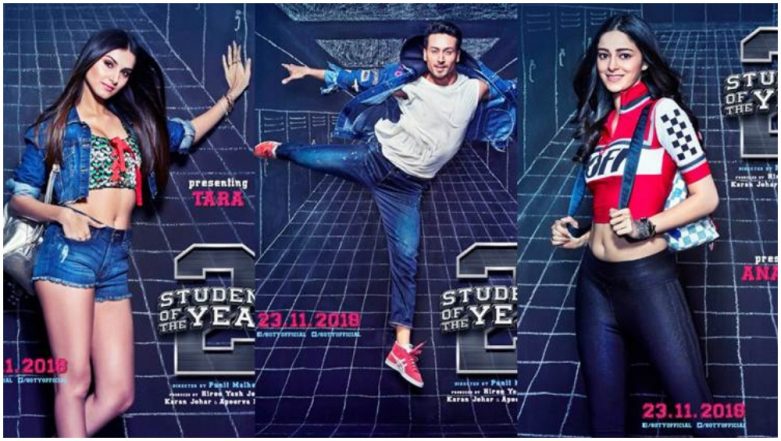 With each passing day, Karan Johar's production venture Student of the Year 2 is finding it difficult to stay afloat at the Indian box office. The film, which had generated a good amount of buzz with its trailer and songs, has failed to strike a chord with the audience at the cinema halls. Despite taking a good opening of Rs 12.06 crore, SOTY 2 hasn't managed to keep up the collections and now it seems the teen romantic drama is inching towards the end of its theatrical run. After underperforming over the second weekend, Tiger Shroff starrer fell flat on its second Monday as it collected in the Rs 1 crore range. Student of the Year 2 Box Office Collection Day 10: Tiger Shroff, Ananya Panday and Tara Sutaria Starrer Performs Below Average Over the Second Weekend, Earns Rs 64.52 Crore

According to trade portal Boxofficeindia.com, Punit Malhotra's directorial venture only managed to rake in Rs 1.15 crore on day 11. This means the total box office collection of Student of the Year 2 now stands at Rs 65.67 crore which frankly speaking isn't bad. However, considering Tiger's star power, the collections should have been much better than this.

Since Ajay Devgn, Rakul Preet Singh and Tabu's film De De Pyaar De is currently running successfully in theatres, it's only making things tough for SOTY 2 at the box office. The college drama, which has marked the debut of Ananya Panday and Tara Sutaria, could have a lifetime collection of around Rs 70 crore if it sustains itself in the coming weekdays. Student of the Year 2 Box Office Collection Day 7: Tiger Shroff and Ananya Panday Starrer Under Performs in Week 1, Rakes in Rs 57.90 Crore

Also, with Arjun Kapoor's much-awaited film India's Most Wanted releasing this Friday, SOTY 2 only has few days to mint as much moolah as possible before facing more competition at the ticket windows.