The box office is finally trying to gain back its patron and Diwali did see a few releases. One of them was Suraj Pe Mangal Bhaari but the movie couldn't get the audience's attention. That doesn't mean you lose hope, as our Trade experts suggest. 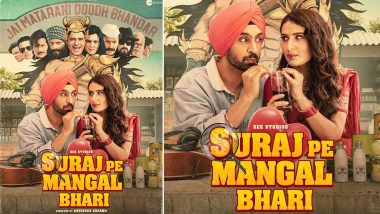 Cinemas finally started opening up in mid-October and since then have been showing old movies to gauge the crowd's reaction. COVID-19 scare is still there with many predicting second and third waves. In the midst of all that, Suraj Pe Mangal Bhari braved the scare and released it at the theatres this Diwali along with Sir, Biskoth and Irandam Kuthu. While the Hindi movies didn't create any spark, the South Indian movies did manage to get the eyeballs and that makes trade expert Girish Johar very hopeful about the future. Suraj Pe Mangal Bhari Movie Review: Manoj Bajpayee, Diljit Dosanjh’s Comic Timing Is Wasted in This Farcical Comedy (LatestLY Exclusive)

Johar says, "India is a traditional theatrical market so cinemas will never go out of fashion. We just need one pan-India release like Sooryavanshi, 83 or RRR and we will bounce back. People will throng back to the theatres." His belief stems from two facts. "Up north, the releases couldn't lure the crowd enough to come to the theatres but down South, we did have one or two films that did quite well. Biskoth and Irandam Kuthu had a few houseful shows as well," Johar exclaims. That obviously is good news for the industry which has been devastated due to COVID-19.

The one other fact that gives Johar the hope that if the right kind of movie releases, people will come to the theatres is the crowds going for Diwali shopping. "Safety factor could have in mind while going to theatres but they went for Diwali shopping in herds. So despite the scare, people didn't bother and went out to shop. That makes me come to the conclusion that our Diwali offering at the theatre wasn't enticing enough to let them take a chance there too," Johar infers. Also, Johar reveals that all the theatres pan-India haven't even opened up. So there's still time. Aamir Khan Excitedly Steps Out To Watch Fatima Sana Shaikh’s Suraj Pe Mangal Bhari In a Theatre (Read Tweet)

Many reports have suggested that Suraj Pe Mangal Bhari's shows were getting cancelled. Another Trade Expert on anonymity reveals, "The movie didn't have enough buzz around it and many weren't even aware that a new movie has released at the theatre". Biskoth and Irandam Kuthu received terrible reviews but it seems the pent-up demand for content at the theatres made many check them out anyway.

(The above story first appeared on LatestLY on Nov 17, 2020 07:41 PM IST. For more news and updates on politics, world, sports, entertainment and lifestyle, log on to our website latestly.com).