Sushant Singh Rajput Demise: Mukesh Bhatt Had Approached the Actor for Sadak 2 and Thought He Was a Disturbed Soul

Mukesh Bhatt in his recent interaction opened about how he had approached the actor for two of his productions but realised they weren't on the same page. He also said that he feared Sushant was going 'Parveen Babi' way. 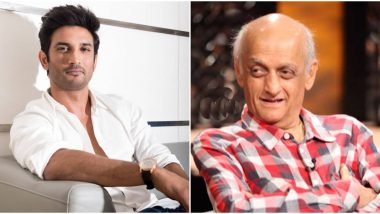 Sushant Singh Rajput was a brilliant actor, gone too soon. A rising star in Bollywood, his last release Chhichhore was a huge hit at the box office. While one may think he had everything, friends close to him insist he was suffering from clinical depression but had stopped taking his anti-depressant pills. While Bollywood is still coping with its huge loss, producer Mukhesh Bhatt in his conversation with Times Now revealed how "he saw it coming" in Sushant's case. Meaning, he was aware of his condition and always thought he was a disturbed soul. Nupur Sanon Slams Trolls and Haters Who Incessantly Demand Celeb Reactions Over Sushant Singh Rajput's Demise (View Post).

The producer had earlier approached the actor for Aashiqui 2 and Sadak 2 but realised they were never on the same page. "He was a very disturbed boy. He was not there while talking to me, I felt that he was not on the same plain. There was something amiss, something wrong," Bhatt recalled in his interaction. Later he even compared the actor to veteran actress Parveen Babi who suffered from schizophrenia and thought Sushant was heading her way. Amul Topical’s Heart-wrenching Tribute to Sushant Singh Rajput Will Bring a Lump In Your Throat.

Later the producer even suggested the youngers to not enter the glamour field if they can't cope up with stress and his comments irked Union minister Babul Supriyo. The politician took to his Twitter account to reason with the producer and also question him as to why "he didn’t act or help the actor out as a fatherly figure”.

Anguished to hear MukeshBhatt ji (otherwise a good friend of mine) saying on @TimesNow that he saw it coming for Sushant!He may not hv given him #Sadak2 #Ashique2 for professional reasons, that's fair enough but it's a shame that he didn't act or help him out as a fatherly figure

"Anguished to hear MukeshBhatt ji (otherwise a good friend of mine) saying on @TimesNow that he saw it coming for Sushant!He may not hv given him #Sadak2 #Ashique2 for professional reasons, that’s fair enough but it’s a shame that he didn’t act or help him out as a fatherly figure,” Supriyo tweeted. RIP Sushant Singh Rajput: #BoycottBollywood Trends on Twitter as Netizens Slam Industry For Not Accepting the Late Actor.

Netizens meanwhile are slamming Bollywood on social media for its nepotism and how Karan Johar should be blamed for pushing the actor to the edge.

(The above story first appeared on LatestLY on Jun 15, 2020 05:40 PM IST. For more news and updates on politics, world, sports, entertainment and lifestyle, log on to our website latestly.com).