Mumbai Police Commissioner Param Bir Singh, in a recent press conference, revealed various details that have so far come into their notice, right from how a depressed Rhea Chakraborty left Sushant's house on June 8 to how the late actor googled 'painful death' the night before his suicide. 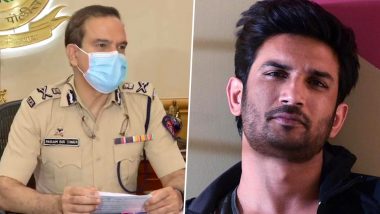 And while investigation and speculations keep adding to the media circus that SSR's death has unfortunately become, Mumbai Police Commissioner Param Bir Singh, in a recent press conference revealed various details that have so far come into their notice. Sushant Singh Rajput Death Investigation: Bihar Police Reveal Sim Cards Used By Late Actor Were Not Registered Under His Name; To Now Pull Call Records (View Tweet).

In a press conference, Singh revealed that Sushant had googled his own name for over two hours to see articles that were written about him, in addition to 'bipolar disease', 'schizophrenia' and 'painless death'. The officer also revealed that Sushant had been upset over how his name was dragged into his ex-manager Disha Salian's suicide on June 8. Sushant Singh Rajput's Last Movie Dil Bechara To Premiere On Star Plus On August 9, 2020 After Digital Release on Disney+ Hotstar (Deets Inside).

Also clarifying over the Mumbai Police's tussle with Bihar Police officers who are in the city, Parambir Singh clarified, "Bihar Police has no jurisdiction to investigate this case, we are seeking legal opinion on that. We have not given a clean chit to anyone, but the complainant [referring to KK Singh's complaint] has not come to us." Also addressing the recent 'forceful quarantining of Bihar IPS Officer Vinay Tiwari, the commissioner said, ""We have no role in quarantining any officer, it is the BMC that has acted on it."

He confirmed that there were issues between Rhea and Sushant's families. "Rhea had some disputes with Sushant's family. We recorded Rhea's statement twice. We examined if there was a troubled relationship. She shared how they met. She has shared about his mental illness and also incidents [pertaining to that]. Doctors' prescription was also shared. We have verified everything about their Europe tour."

Revealing that Sushant was very much affected by Disha Salian's death and his name being asociated in the articles that followed, he revealed, "There was a message we saw, which was sent by Sushant to his lawyer on why his name was being dragged in the Disha Salian suicide case. Sushant was very disturbed since the suicide as his name was being dragged into it."

(The above story first appeared on LatestLY on Aug 03, 2020 03:12 PM IST. For more news and updates on politics, world, sports, entertainment and lifestyle, log on to our website latestly.com).